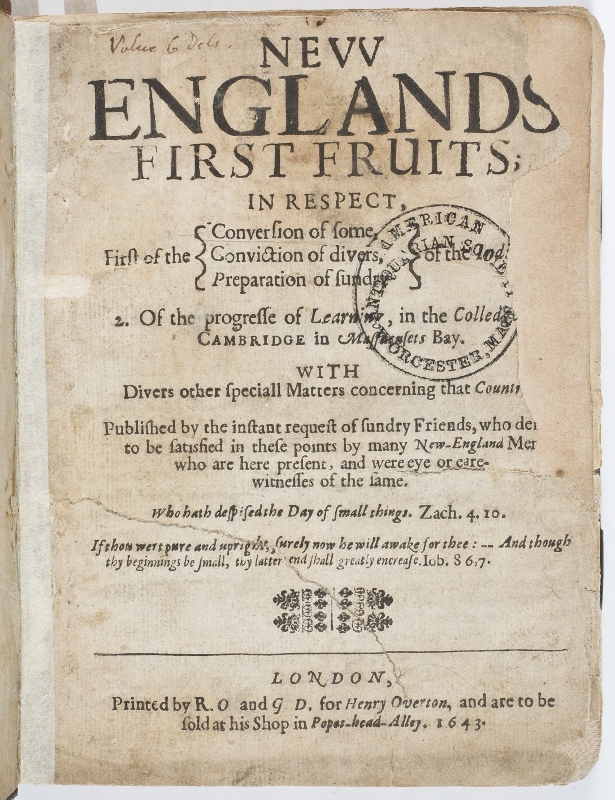 Missionary work among the native population in New England did not begin in earnest until several years after English settlements had been established at Plymouth and Massachusetts Bay. New England’s First Fruits is the colonists’ response to English criticism about the lack of evangelical work being performed in New England. Colonists asserted that they first needed to build homes, secure food, form a government, and establish an institution of higher education before turning their attention to missionary work.

Some attribute this work to John Eliot though the author is anonymous.

London: Printed by R.O. and G.D. [R. Oulton and G. Dexter] for Henry Overton, and are to be sold at his shop in Popes-Head Alley.

Nevv Englands first fruits; in respect, first of the conversion of some, conviction of divers, preparation of sundry of the Indians. 2. Of the progresse of learning, in the colledge at Cambridge in Massacusets [sic] Bay. With divers other speciall matters concerning that countrey. Published by the instant request of sundry friends, who desire to be satisfied in these points by many New-England men who are here present, and were eye or eare-witnesses of the same. [Three lines of Scripture text]