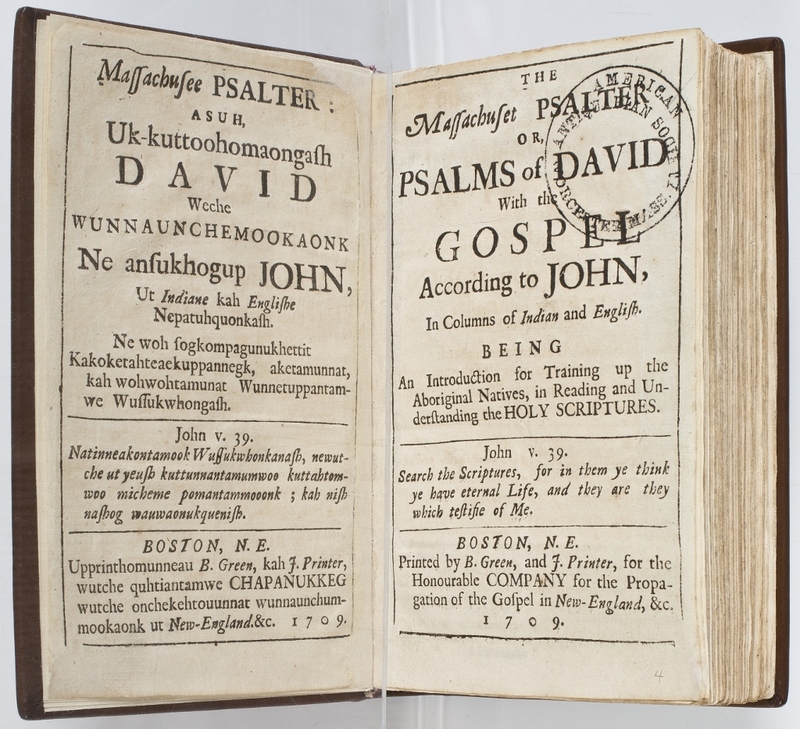 This book of Psalms, translated by Experience Mayhew of Martha’s Vineyard, relies heavily on the interpretive work performed by John Eliot and Job Nesuton for the Algonquian Bible, published nearly fifty years earlier. However, the dialect of the Wampanoags on Martha’s Vineyard differed from that of natives on the mainland, and so spelling and pronunciation of words in the Massachuset Psalter differed slightly when compared to other translated works of this period. Throughout the psalter, text is printed in two columns, the left in Algonquian and the right in English.

The Massachuset Psalter is especially significant because it is the only work in which James Printer’s name appears in the imprint. Though Printer undoubtedly had a hand in printing many (if not all) of the English-to-Algonquian translations of this period, he is only credited as printer on a single publication.

Boston, N.E.: Printed by B. Green, and J. Printer, for the Honourable Company for the Propagation of the Gospel in New-England, &c.

The Massachuset psalter or, Psalms of David with the Gospel according to John, in columns of Indian and English. Being an introduction for training up the aboriginal natives, in reading and understanding the Holy Scriptures. [Three lines from John]