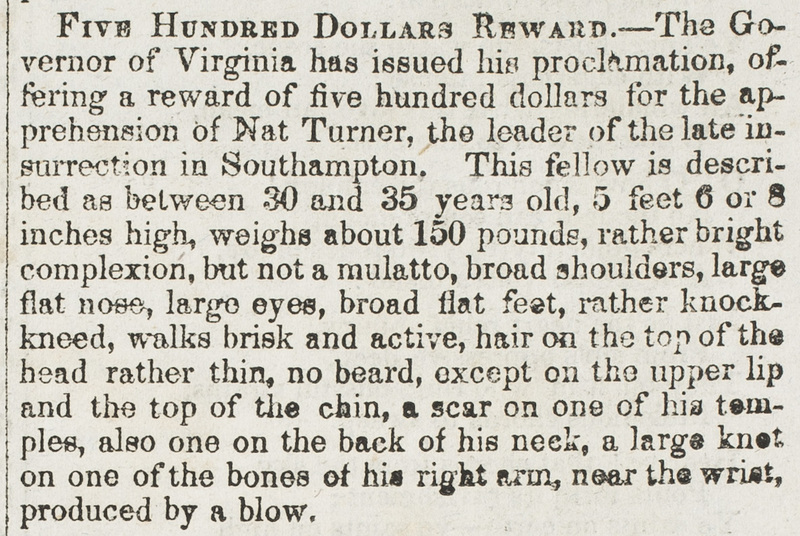 Shortly after Nat Turner’s rebellion, the Christian Advocate & Journal & Zion’s Herald printed part of the Virginia governor’s proclamation offering a reward for the capture of Nat Turner and giving a brief physical description. The article paints a picture of a man who had not lived an easy life; he had scars on his temple and neck and “a large knot on one of the bones of his right arm, near the wrist, produced by a blow.” Though its purpose is only to give a sketch of Turner’s physical appearance, the advertisement also gives us insight into how Turner might have been perceived by his contemporaries. He “walks brisk and active,” illustrating for the reader a man who knew his purpose and did not hesitate to pursue it.

Turner was described as having a “rather bright complexion, but not a mulatto, broad shoulders, large flat nose, large eyes.…” The “not a mulatto” phrase has drawn the attention of scholars who speculate that this is a possible denial of Turner’s mixed parentage; specifically, it was rumored in Southampton that Benjamin Turner had raped Nat Turner’s mother (Greenberg 2003; 17). Moreover, as time passes, the description changes as Turner becomes increasingly demonized. In an extract of a letter printed in the Richmond Enquirer after Turner’s capture, the writer largely confirms the description given in the governor’s proclamation, but adds some vivid descriptions.

He answers exactly the description annexed to the Governor’s Proclamation, except that he is of a darker hue, and his eyes, though large, are not prominent.—they are very long, deeply seated in his head, and have a rather sinister expression. A more gloomy fanatic you have never heard of. (November 8, 1831)

← Authentic and Impartial Narrative
"The Bandit-Taken!" from the Richmond Enquirer →
"Five Hundred Dollars Reward" from the Christian Advocate