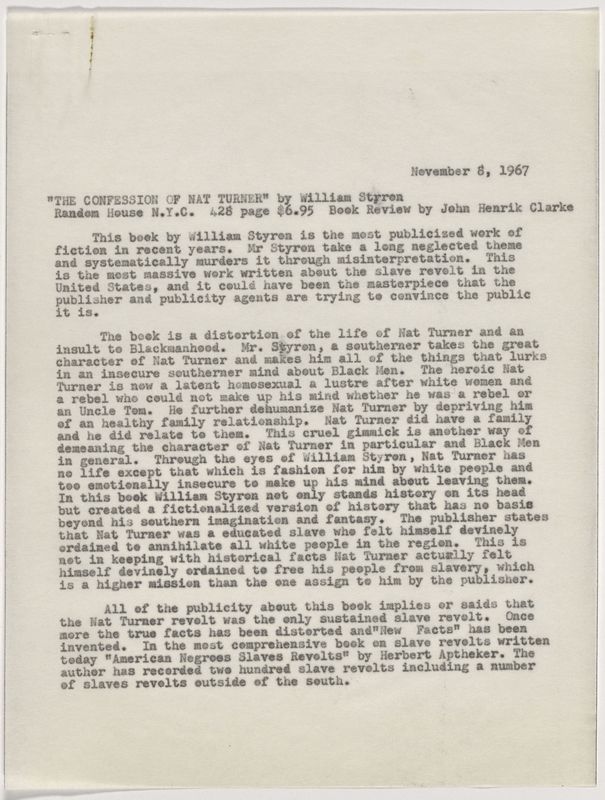 William Styron’s novel, which came out in the early years of the Black Power movement, was especially reviled by the African American intelligentsia. “No event in recent years has touched and stirred the black intellectual community more than this book,” stated John Henrik Clarke, a Pan-Africanist actively engaged in the rewriting of African and African American history. Born in 1915 in Alabama into a family of sharecroppers and raised in Georgia, Clarke migrated to Harlem in 1933, at the end of the Harlem Renaissance. Clarke immersed himself in the intellectual life of the black community and attended New York University and Columbia University without graduating. A largely self-trained historian and writer who traveled widely in Africa, he published and edited close to thirty books.

Clarke was a cofounder of the Harlem Quarterly (1949-51) and an associate editor of Freedomways, the leading progressive African American journal that was particularly influential during the Black Power years. In the 1960s, Clarke served as director of the African Heritage unit of the antipoverty program Harlem Youth Opportunities Unlimited, and as special consultant and coordinator of the Columbia University-WCBS television series Black Heritage. In 1969, he was one of the founders—and the first president—of the African Heritage Studies Association formed in reaction to the African Studies Association’s “Eurocentric approaches to African Studies and its marginalization of African descendant scholars.” Clarke joined Hunter College that year and helped establish the black studies program there and at Cornell University.

In an early review of Styron’s Confessions, Clarke denounced the novel as an “insult to Blackmanhood….The Heroic Nat Turner is now a latent homosexual a lustre [sic] after white women and a rebel who could not make up his mind whether he was a rebel or an Uncle Tom.” Clarke also stressed that Styron dehumanized Turner by depriving him of “a healthy family relationship.” The book’s distortions, he concluded, demanded a refutation by “honest writers and historians.”