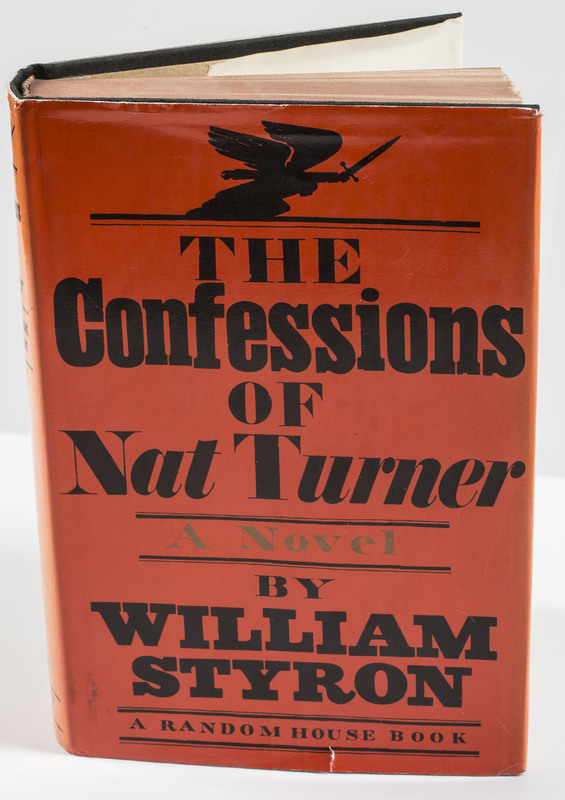 Starting with the scene in his prison cell when Nat Turner is being interviewed by Thomas Gray, William Styron’s 1967 Confessions of Nat Turner imagines Turner’s life leading up to the rebellion, as well as retells what transpired on August 21, 1831, and the months after until Turner was captured and hanged. Styron’s Turner at one point wonders “just how much of the truth I was telling [Gray] might find its way into those confessions of mine that he would eventually publish.” In the novel, Styron fills in this “truth” by offering a number of reasons why Turner did what he did.

These motives start in Turner’s childhood with scenes depicting him as a victim of the oppression into which he is born. Turner’s childhood years are marked by hardship, not the least of which is the rape of his mother by a drunken overseer. As he grows, Turner becomes somewhat of a pariah in the Southampton plantation life Styron imagines, but he nonetheless becomes a strong, if not misguided, leader. Styron’s Turner’s motives are rooted in the Old Testament, and Turner is at times depicted as a sage preacher and at other times as a misguided fanatic. Turner’s precociousness works to his advantage and disadvantage in his childhood, and he is given to fantasies of becoming white. One of the most controversial scenes in Styron’s novel is Turner’s youthful sexual encounter with Willis, a fellow slave. Turner considers the pleasures that come with this experience “a danger and a warning,” and he thereafter baptizes himself and promises his dedication to God. Though Styron’s Turner keeps his promise and never marries, he begins to imagine sexual encounters with black and white women. Styron imagines Turner’s sublimated desire for Margaret Whitehead ultimately leads to his butchery of her, the only death Turner himself is responsible for.

Styron’s Turner describes himself in his adult life as “the most pliant, unremarkable young slave anyone could imagine,” and he works hard as a carpenter on various plantations while plotting the rebellion. Styron imagines that Turner’s militancy is in part inspired by stories of Napoleon Bonaparte he heard as a child. Turner regales his followers with stories of “a seven-foot black prodigy and the scourge of white creation…a nigger Napoleon.” As the plotting gets under way, Turner teaches his army “absolute obedience,” and he adopts commands he heard during drills of the mounted militia outside the Jerusalem armory. Despite his commanding lead, Styron’s Turner has moments of weakness as his “clammy apprehension” causes him to be ill. When the killing begins, Turner’s inability to kill Travis is not because his axe is dull, as he explains in the original Confessions, but because, he says, “I was not ready.” Styron’s Turner later describes his hesitation as “womanish failure.” Despite these brief portrayals of Turner’s remorse, Styron’s Turner is ultimately depicted as demonic in his unwillingness to repent; Turner ultimately tells Gray, “I feel no remorse for anything. I would do it all again.”

William Styron, The Confessions of Nat Turner. From the collection of the American Antiquarian Society.