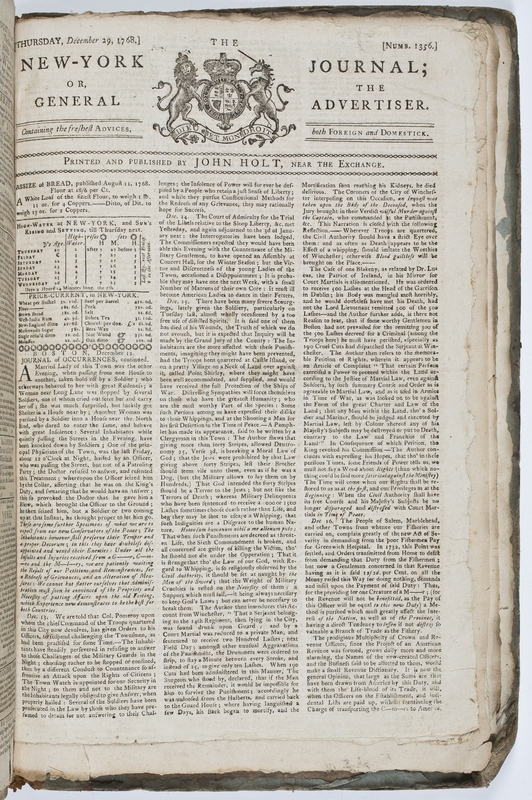 Although the repeal of the Stamp Act led many to briefly believe the Crown would leave the colonies alone, the institution of the Townshend Acts in 1767 erased that hope. The colonists’ resistance to these acts led to the establishment of British troops in Boston for the purpose of restoring order.

They began arriving in the harbor at the end of September 1768, and almost immediately the leaders of the Boston resistance began working to inform the other colonies of what life was like under military occupation. Chief among the means of doing this was the “Journal of Occurrences,” a series of anonymous news accounts published in the New York Journal from 1768 to 1769, giving a “factual” account of incidents during the occupation. Thought to have perhaps been written by Samuel Adams (1722-1803), or possibly a collaborative group of men, the articles exaggerated the situation for political purposes, depicting the British soldiers as committing a long line of atrocities, assaulting men and raping women with great regularity. In the way of news distribution of the period, the “Journal” was reprinted in many newspapers throughout the colonies, inciting anger toward the British and sympathy for the plight of the Bostonians.

The New-York Journal; or, the General Advertiser

“"Journal of Occurrences",” The News Media and the Making of America, 1730-1865, accessed July 25, 2021, https://americanantiquarian.org/earlyamericannewsmedia/items/show/130.