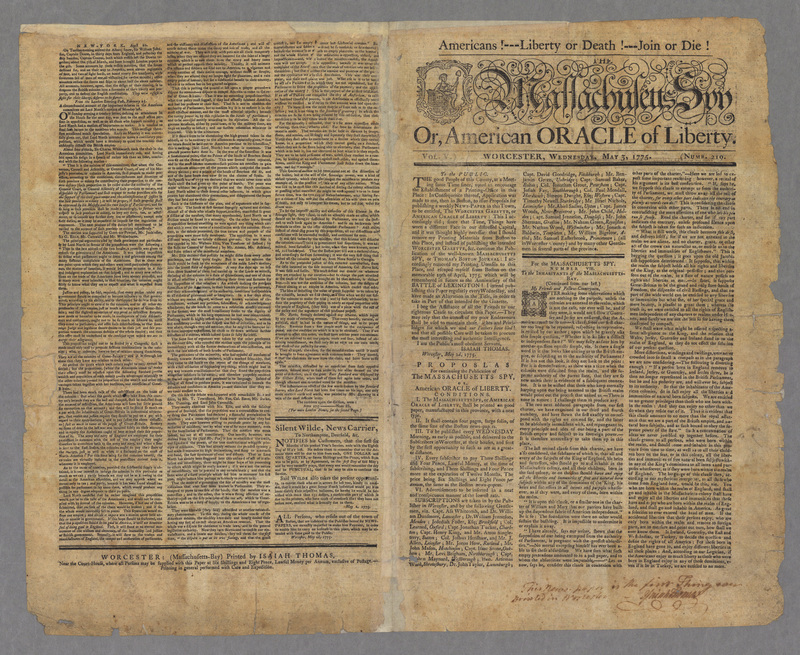 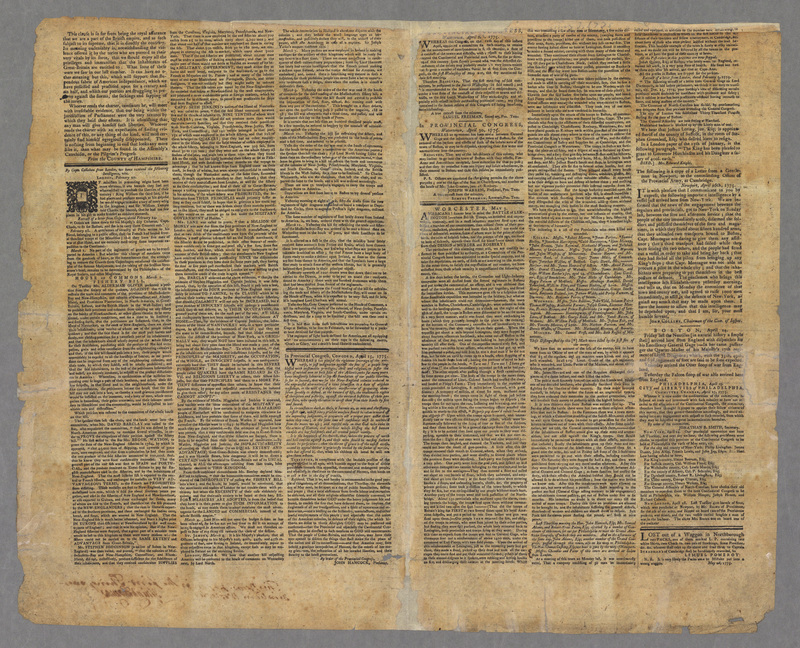 While most colonial newspapers had circulations of between 300 and 600, the Massachusetts Spy had a circulation of 3,500 from subscribers throughout the thirteen colonies, making it the most popular American newspaper at the time. Designed specifically for the middle class, the paper was founded in Boston in 1770 by Isaiah Thomas (1749-1831) and his former master, Zechariah Fowle (1724-76). Later, Thomas would buy Fowle out and publish the Spy on his own. While Thomas initially tried to make the Spy politically impartial, he soon found it impossible to do so in Boston, the epicenter of the growing imperial crisis. Thomas’s strident Whig position is evident in his writing and in his text above the masthead: “Americans!---Liberty or Death!---Join or Die!”

Thomas’s views frequently got him in trouble with the royal authorities, and under the advisement of John Hancock (1737-93) and with the assistance of Timothy Bigelow (1739-90) and Joseph Warren (1741-75), Thomas smuggled his press out of Boston during the night of April 16, 1775. He removed it to the inland Whig stronghold of Worcester, where he set it up in Bigelow’s basement. When paper finally arrived in early May, he was able to publish this issue of the Spy, the first thing ever printed in Worcester.

As was customary with colonial newspapers, the breaking news appeared on the inside of the publication, and thus on page 3 in column 1 is Thomas’s account of the Battles of Lexington and Concord. Far from objective, Thomas’s partisanship shines through. He ends the introductory paragraph by claiming that the British troops had “wantonly, and in a most inhuman manner fired upon and killed a number of our countrymen, then robbed them of their provisions, ransacked, plundered and burnt their houses! nor could the tears of defenseless women, some of whom were in the pains of childbirth, the cries of helpless, babes, nor the prayers of old age, confined to beds of sickness, appease their thirst for blood!—or divert them from their DESIGN of MURDER and ROBBERY!”

The Massachusetts Spy, or, American Oracle of Liberty

“"Worcester, May 3. Americans! forever bear in mind the Battle of Lexington!",” The News Media and the Making of America, 1730-1865, accessed July 25, 2021, https://americanantiquarian.org/earlyamericannewsmedia/items/show/19.