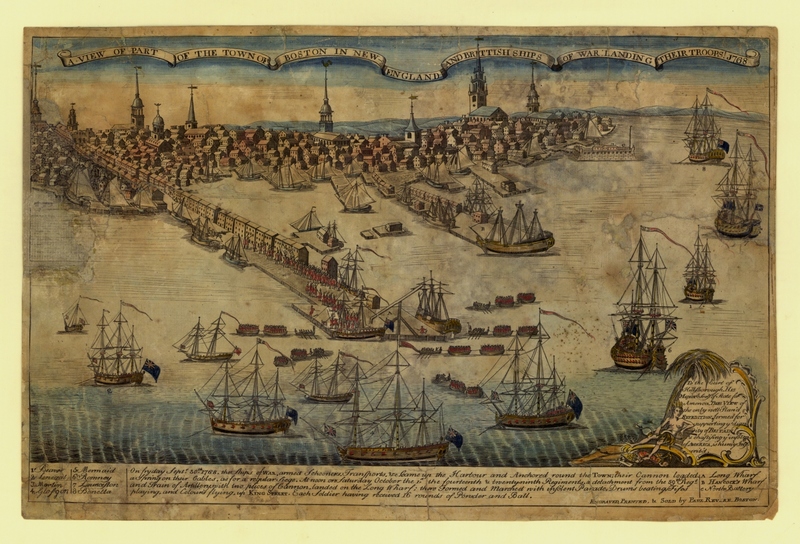 While newspapers decried in print the occupation of Boston by British troops beginning in 1768, Paul Revere (1734-1818), a silversmith and engraver in Boston, also did so visually. This engraving shows Boston Harbor facing the north part of town, full of British warships and troops disembarking onto Long Wharf. Revere labels the eight British ships and describes the scene: “On Friday Septr 30th 1768, the Ships of War, armed Schooners, Transports, &c. Came up the Harbour and Anchored round the Town; their Cannon loaded, a Spring on their Cables, as for a regular Siege. At noon on Saturday October the 1st the fourteenth & twenty-ninth Regiments, a detachment from the 59th Regt and Train of Artillery, with two peices [sic] of Cannon, landed on the Long Wharf; there Formed and Marched with insolent Parade, Drums beating, Fifes playing, and Colours flying, up King Street. Each Soldier having received 16 rounds of Powder and Ball.”

Though at first glance it appears to be a dispassionate description, the implication that the British were preparing for a siege and the use of “insolent” when describing the troops’ parade into town suggest otherwise. Furthermore, Revere cheekily dedicated the engraving to the Earl of Hillsborough (1718-93), secretary of state for the colonies, in a cartouche at the bottom right that is bordered by a Native American standing on a British soldier. “This View of the only well Plan’d Expedition, formed for supporting ye dignity of Britain & chastising ye insolence of America, is hum’y Inscrib’d,” he concludes. Aside from any textual ambiguities, the enormity of resorting to military occupation would have been clear in such a detailed visual representation.