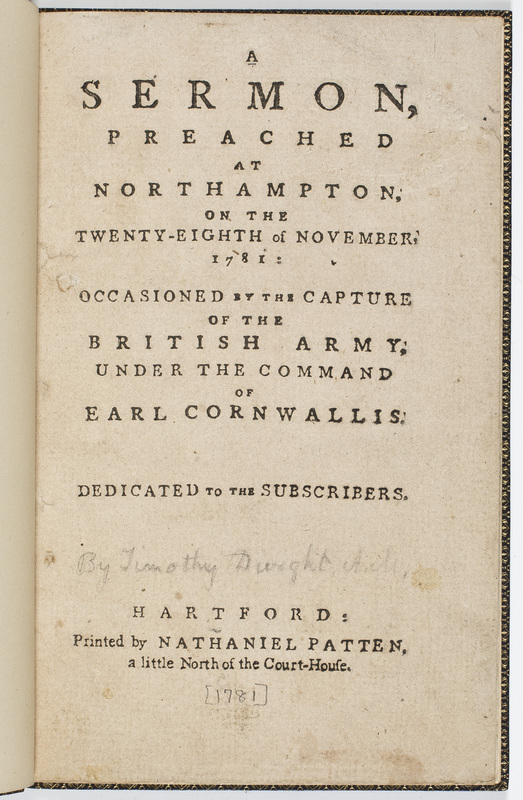 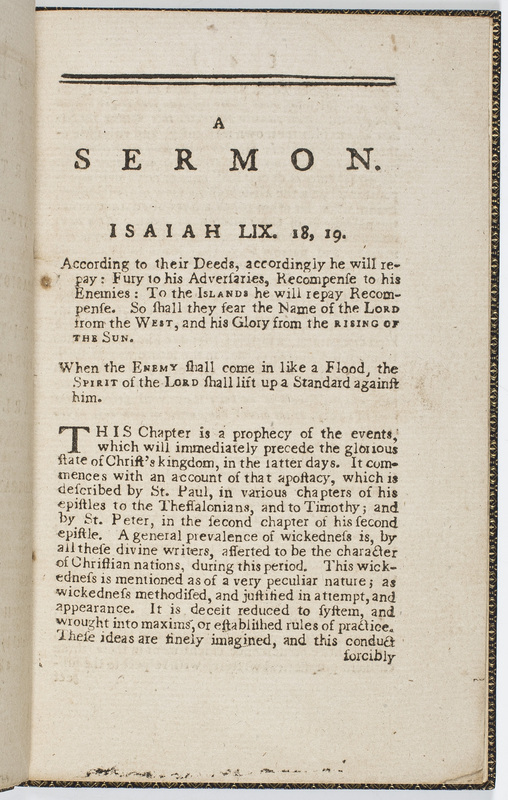 Just as before the war, sermons were still an important means of reflecting on and spreading news. This sermon, preached by Timothy Dwight (1752-1817) at Northampton, Massachusetts, on November 28, 1781, puts news of the British surrender at Yorktown into a historical and religious context. Dwight had served as a chaplain in the Continental army from 1777 to 1778, resigning his commission to return to Northampton, his birthplace, upon his father’s death. In this sermon, Dwight reflects on why the revolution was necessary, tracing what he saw as Britain and Parliament’s moral corruption and decline, particularly their selfishness, greed, pride, and acceptance of moral relativism.

With the American victory at Yorktown, however, the tide had shifted. The British “have seen one great and prosperous effort overcast all their shining prospects, and dissolve the gay air castle they have been so long employed in building….Conquest, their beloved object, although long viewed by us, and by other nations, as a dream, with which none but a sleeping country could amuse itself, will now probably awake them also; when they will perceive, that all the alluring scenes it presented, all the golden mountains it promised, are…removed forever beyond the power of recovery.” And though Dwight had great hopes for progress and freedom of thought and religion in the establishment of America, he warns his congregation that “Sins of the deepest dye, and of an inconceivable multitude, blacken our character also, and provoke the vengeance of Heaven.” While there was reason for hope, there should also be repentance and caution of repeating the same mistakes. The news of the victory was cause for joy, but also for reflection as to what might come next.

Dwight became a prominent author, preacher, educator, and theologian. He served two terms in the Massachusetts legislature and over twenty years as the president of Yale University, and was an influential force in the Second Great Awakening.

A sermon, preached at Northampton, on the twenty-eighth of November, 1781: Occasioned by the capture of the British Army, under the command of Earl Cornwallis

Dwight, Timothy, 1752-1817, “A sermon...Occasioned by the capture of the British Army, under the command of Earl Cornwallis,” The News Media and the Making of America, 1730-1865, accessed May 29, 2020, https://americanantiquarian.org/earlyamericannewsmedia/items/show/65.