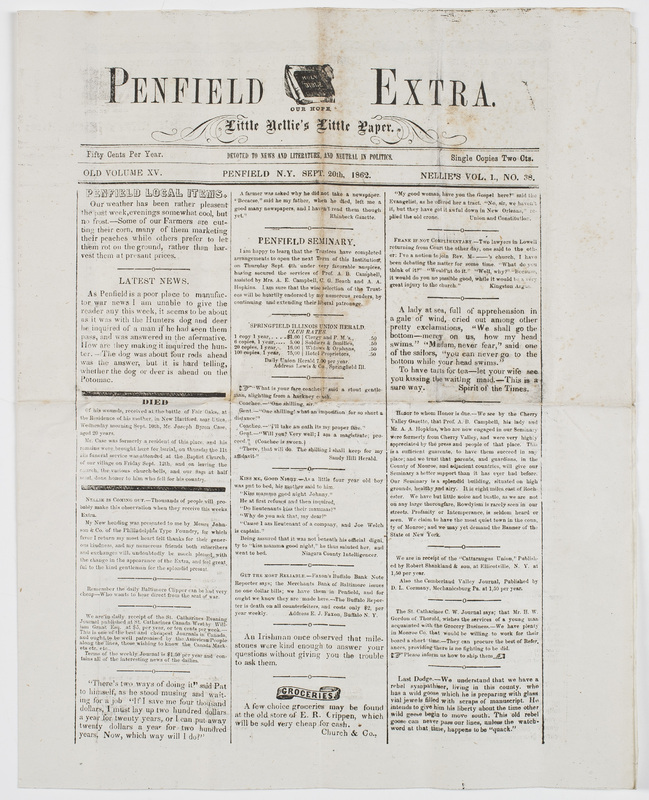 With the ubiquity and voracious appetite for news throughout the country, it is no surprise that the publication of amateur newspapers became a popular hobby in the nineteenth century. Though the first amateur newspaper in the United States is believed to have been published in 1805, the pastime proliferated in the 1840s and 1850s and reached its heyday in the 1870s and 1880s following the invention of an inexpensive tabletop press in 1867.

The Penfield Extra, subtitled “Little Nellie’s Little Paper,” was a weekly amateur newspaper published in Penfield, New York, between 1862 and 1866. Started by twelve-year-old Nellie Williams (1849-75), the paper boasted a circulation of more than three thousand copies at the height of its popularity. At a cost of two cents an issue and fifty cents for a yearly subscription, readers were treated to local news, a description of local weather, a robust advertising section, and puns and jokes. Nellie herself described the paper in its masthead as “Devoted to News and Literature and Neutral in Politics.”

Born in 1849, by the age of eight Nellie was working with a press. She began by distributing type after her older brother had finished printing a job on a press their father had won in a card game. When the Civil War broke out, Nellie’s brother enlisted, leaving her in charge of the press. Her first issue of the Penfield Extra was published in December 1861 and she described herself to her audience as “A little Lass not yet in her teens who is the sole Editress, and Compositor, and probably the youngest Publisher, and Editress in the world. The reader will of course over-look a little bad spelling and typo-graphical errors.” After the first year, the circulation of her paper increased tenfold, and the next year she doubled readership, in the process becoming something of a local celebrity.

Though most amateur newspapers were published for the enjoyment of its editor, publisher, and readers, Nellie also sought to make a profit. With her mother dead, a brother off to fight in the Civil War, and a sickly father, Nellie wanted her newspaper to be successful. An aggressive advertiser, Nellie campaigned locals to publicize their business in her paper: “You might ‘bout as well go a fishing without any bait, as to undertake to do a large paying business…without advertising in a local newspaper.” Taking advantage of the relatively new and cheap availability of photography, she included in her promotional package a nickel-sized tintype portrait of herself, attached to her business card.

Though Nellie mostly focused on local news, weather, jokes, and ads (the latter usually filling two to three pages), rather than the Civil War that was in many ways the impetus for her undertaking, her paper and her story clearly struck a chord with a war-weary public. Advertising, humor, connection to the community, and the success of a young girl editress provided hope and an underlying current of morale in difficult times. And Nellie did not ignore the war entirely; in this issue, she mentions the death of a former resident due to war wounds and includes a joke featuring a rebel sympathizer living in the county.

In 1866 Nellie closed her paper, citing that the price of newsprint was too costly. At age nineteen, she married Henry Braden, giving birth to two children before her death of consumption at age twenty-five.