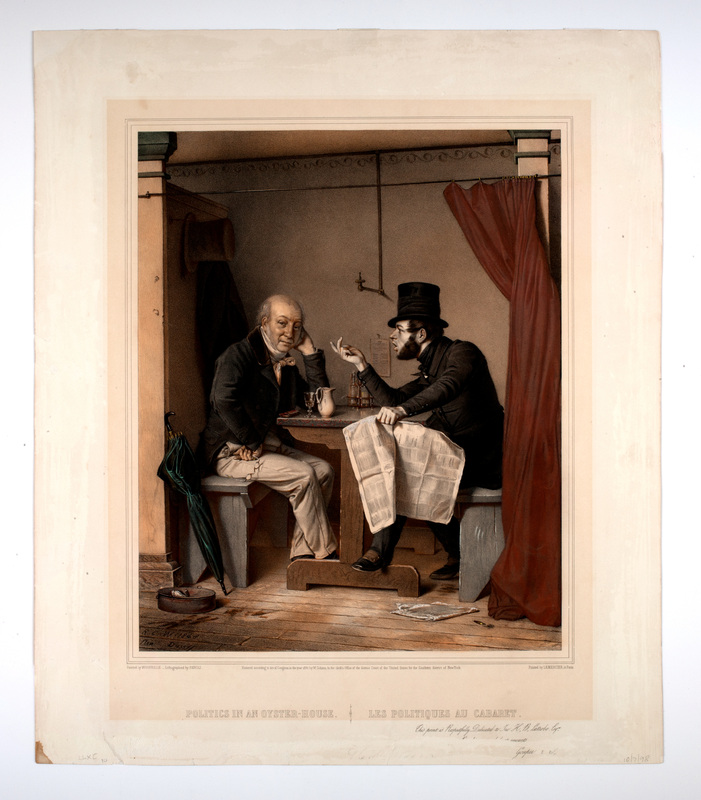 This 1851 lithograph, after an 1848 painting by Richard Caton Woodville (1825-55), encapsulates the central role the newspaper played in American politics. In the image, two men sit across the table from each other in an oyster house, an establishment used commonly as a meeting spot and watering hole. The younger man, dressed all in black and wearing his top hat indoors, is leaning across the table toward his middle-aged companion, arguing some political point. He tightly clutches a newspaper, suggesting that something he has read has instigated the argument. The older man looks out at the viewer, rather than at his young, fiery companion, with a slightly bemused look, perhaps implying that the situation is a familiar one and that he has heard—and probably disagreed with—all of the younger man’s points before. Though we have no way of knowing what the argument is about, the image captures a scenario typical at the time, in which a political argument, instigated or fueled by the latest news, takes place in a public meeting space.

Woodville, the painter, belonged to a prominent Baltimore family but left the United States for Europe at the age of twenty. There he spent several years studying under Karl Ferdinand Sohn (1805-67) in Düsseldorf, Germany. Woodville was known for painting contemporary interior scenes with exquisite detail and color. Many of his paintings, including Politics in an Oyster House, were exhibited in the United States, often at the American Art-Union. The painting was commissioned by a prominent Baltimore citizen named John H. B. Latrobe (1803-91), and it hung in his private residence after its exhibition at the union. Latrobe also loaned it out for the first annual exhibition of paintings at the Maryland Historical Society, and Woodville made a copy that was exhibited at the Royal Academy in London. The popularity of the painting led to its lithographic version, seen here, which was distributed by the New York branch of the famous French lithography company Goupil & Co.