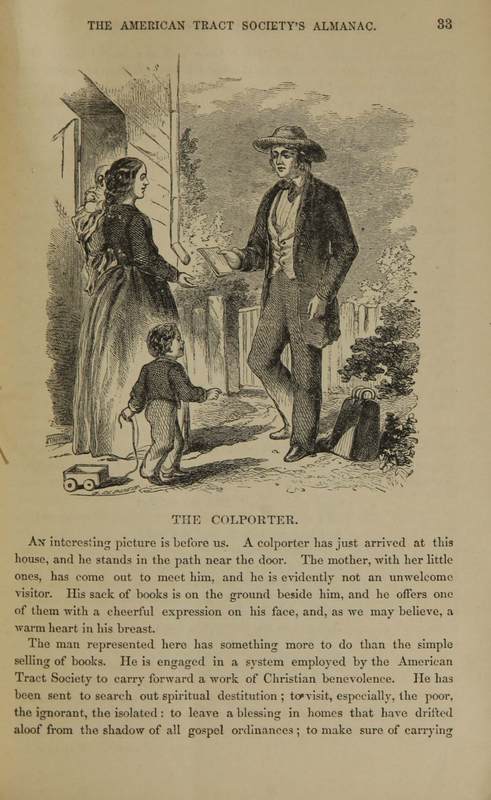 This illustration depicts an American Tract Society (ATS) colporteur at work. The term “colporteur” was coined in eighteenth-century France as a name for itinerant peddlers of books, especially religious books. In America, the term came to be closely associated with the traveling agents of the ATS. The ATS, founded in 1825 in New York City, was a pioneering, multidenominational religious publisher. For decades the society flooded the nation with religious tracts, newspapers, books, almanacs, children’s periodicals, and other publications. In 1850 ATS colporteurs visited 505,422 families, sold nearly half a million volumes, and gave away 35 million pages of books and tracts.

Like many institutions with national reach, the ATS in the 1850s was nearly wrecked by the issue of slavery. Some Northerners wanted the society to publish tracts denouncing the sin of slavery; nearly all Southerners wanted no mention of slavery at all. After the Civil War the ATS was gradually displaced by denominational publishers, but during its heyday it was one of the largest publishing houses in America.

Other publishers used itinerant peddlers as well, but what set ATS colporteurs apart from others was that they were paid by salary instead of by commission on sales, and they were encouraged to give away tracts and books for free as well as to sell them. This was an important distinction. It meant that ATS colporteurs were not incentivized to stay in more prosperous areas, where people had the money to buy books. It meant that the society’s managers, in theory at least, could do what they believed they were called to do: place religious materials into the hands of every man, woman, and child in America. This was an extravagant and ultimately forlorn hope. It was the dream of universal mass media, somewhat before its time.

The American Tract Society's Almanac for the Year of Our Lord and Saviour Jesus Christ 1861:...Calculated for Boston, New York, Washington, and Charleston, and four parallels of latitude.