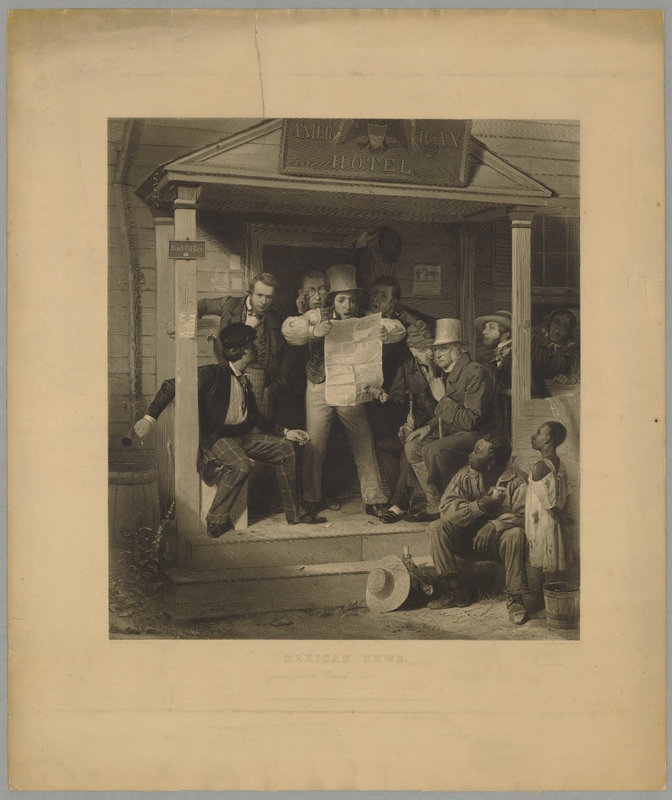 This 1853 engraving by Alfred Jones (1819-1900), called Mexican News, is based on a popular 1848 painting by Richard Caton Woodville (1825-55) titled War News from Mexico. The image places the newspaper at center stage and illustrates how ingrained it had become in American society and politics during the antebellum years. In the image, eleven individuals gather around the porch of the fictitious American Hotel, where a man stands reading a newspaper bearing the headline “EXTRA.” The listeners react in various ways to the latest news from the Mexican-American War (1846-48). Their faces show emotions ranging from astonishment to elation to concern.

Outside of the protective covering of the porch, seated on the step, is an African American man with a child in front of him, and in the window of the hotel there is a woman leaning out, straining to hear. These three listeners are physically and metaphorically outside of the conversation, separated by their race and gender from political participation, but will nonetheless be affected by the outcome of the war in Mexico. They, too, are eager for news.

Woodville, the original painter, belonged to a prominent Baltimore family but left the United States for Europe at the age of twenty. There he spent several years studying under Karl Ferdinand Sohn (1805-67) in Düsseldorf, Germany. Woodville was known for painting contemporary interior scenes with exquisite detail and color. Many of his paintings, including War News from Mexico, were exhibited in the United States, often at the American Art-Union. The engraver, Alfred Jones, was born in Liverpool in 1819 and eventually traveled to America with his family. He attended the National Academy of Design in New York, and in 1839 took an apprenticeship with a banknote engraver. He returned to Europe in 1840, where he studied under London’s master engravers. After returning to America, he became one of the premier engravers in the country, eventually establishing a career in postage stamp engraving. He also engraved a number of images for the American Art-Union, including this one, which was originally engraved and sold by subscription to the union’s members in 1851.