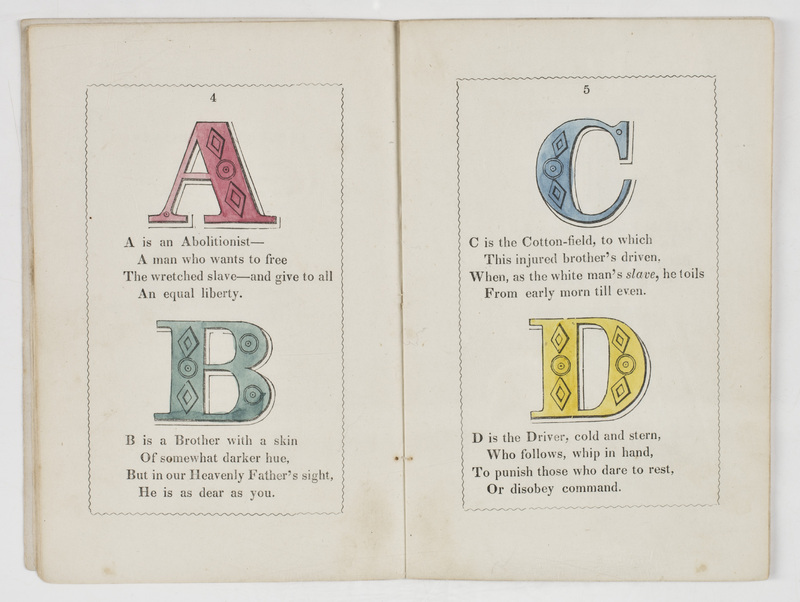 The Anti-Slavery Alphabet is a reader that was published in 1846 for the purpose of being sold at the Anti-Slavery Fair in Philadelphia. The fair was organized by the Philadelphia Female Anti-Slavery Society (PFASS) and raised money for abolitionism by charging a small admission fee and selling antislavery publications.

While this popular alphabet book was published anonymously, authorship was later ascribed to Quaker Hannah Townsend (b. 1812), who worked with the PFASS, and her sister Mary (b. 1814). The sisters’ Quaker background, which encouraged equality between the sexes, likely allowed the Townsends some comfort in their activist roles, as morally educating youth was considered a socially acceptable mission for women writers.

This book, like most antislavery and abolitionist texts, was not read in the classroom but rather would have been read in antislavery and abolitionist households as an attempt to inform the next generation about abolitionist politics and to inspire future activism. Devoid of any illustrations besides the woodcuts of each letter, hand-painted and decorated with concentric circles and diamonds, the simple design of the book directs the reader’s focus toward its activist message rather than its artistry.

Using direct, instructive language as well as the second-person perspective, the text entreats readers to both acknowledge the system of slavery and take action to further the abolitionist cause. Its introduction, which is titled “To Our Little Readers,” urges children to take part in the abolitionist movement by imploring slave masters, educating peers, and boycotting “[c]andy, sweetmeat, pie or cake,” all of which contained sugar, a slave-cultivated staple. It then introduces troubling concepts associated with slavery, such as cotton-field labor (“C is the Cotton-field, to which / This injured brother’s driven”), corporal punishment (“D is the Driver, cold and stern / Who follows, whip in hand”), and kidnapping (“K is the Kidnapper, who stole / That little child and mother”). In the penultimate “Y” quatrain, the reader is told “Bravely to war” against slavery, and the final four lines introduce the young audience to a role model, “the Zealous man, sincere, / Faithful, and just, and true.” Though the text mainly highlights the cruelty of slavery, it also offers hope, depicting an alternative society in which the free black man is “rambling free” and “Delighting ‘neath the palm trees’ shade.”

Click the image below to browse the full book.