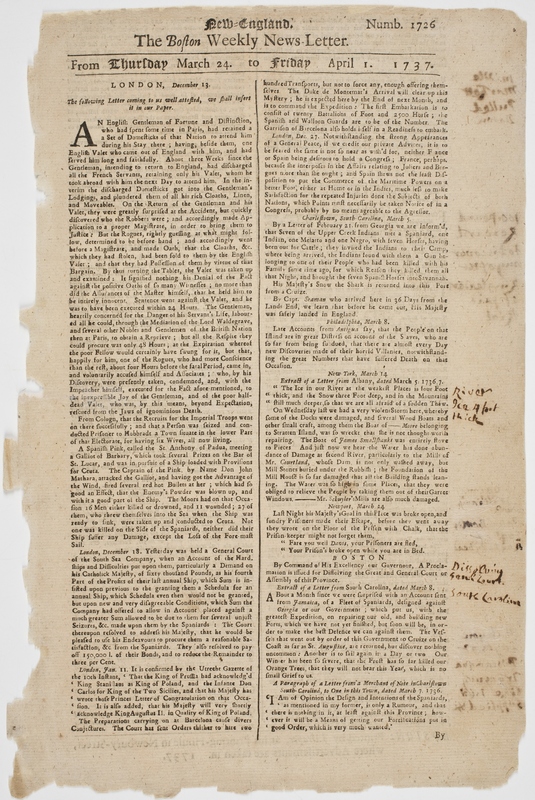 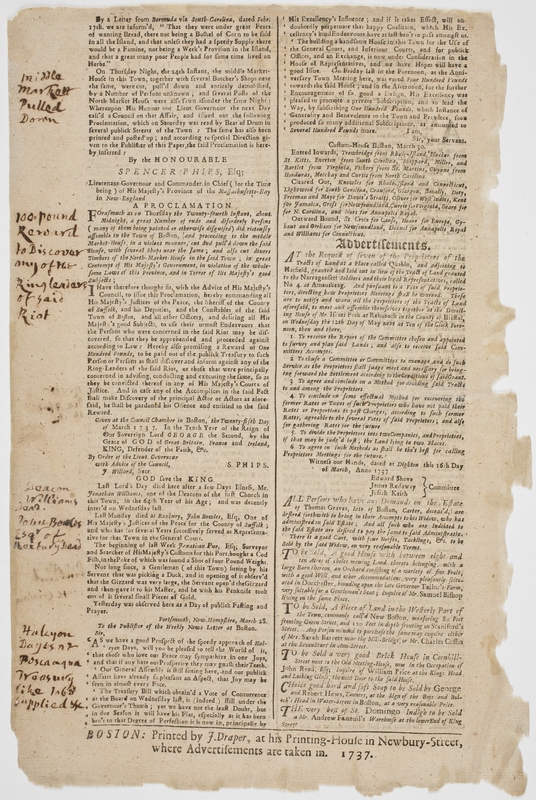 The oldest of the five newspapers in Boston in 1737 was the Boston Weekly News-Letter. Founded in 1704, it was also the oldest newspaper in America. The proprietor of the News-Letter after 1732 was John Draper (d. 1762), who, like most newspaper publishers of that era, ran a general printing shop. For example, Draper printed the Benjamin Colman sermon on the Brocas workshop fire for the Boston booksellers Joseph Edwards and Hopestill Foster. Draper was also the official printer to the governor and council of Massachusetts, which placed him at the heart of the political establishment of the province. It was Draper who printed the official broadside proclamations on the March 1737 market riot.

The April 1, 1737, issue of the Weekly News-Letter, seen here, is typical in the range and organization of its news coverage, though the local news that day is unusually dramatic. In this issue, Draper was the first newspaper publisher to print an account of the market riot, in which a mob opposed to regulated markets tore down the public market sheds in the central part of the city. Draper broke the story in part by reprinting a proclamation by Lieutenant Governor Spencer Phips (1685-1757) condemning the rioters, which had already been circulated and formally read at public gathering places in the city. The other Boston papers could have published accounts earlier, but they did not. They seemed content to wait to see how Draper, the governor’s printer, would handle this politically sensitive story. After this issue of the News-Letter was in print, the other newspapers followed suit, publishing accounts of the riot, the official response, and the political aftermath.

“The Boston Weekly News-Letter,” The News Media and the Making of America, 1730-1865, accessed May 29, 2020, https://americanantiquarian.org/earlyamericannewsmedia/items/show/105.