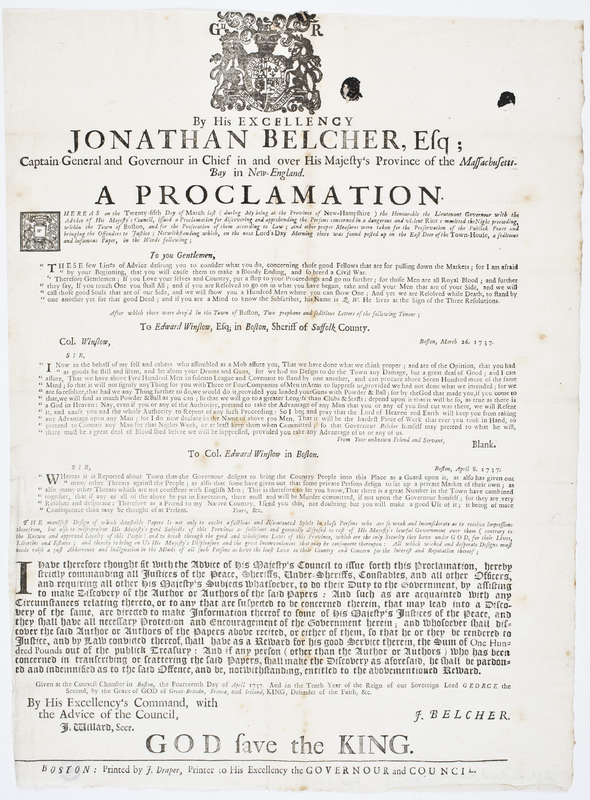 The most formal medium of news dissemination in colonial New England was the government proclamation, issued by the governor or other high official and printed elegantly in broadside form. Proclamations often announced special days of thanksgiving for military victories or other signs of divine deliverance. Proclamations were designed to be consumed in public: they were posted on public buildings and often formally read aloud in public spaces, sometimes announced by the beat of drums. Newspapers typically reprinted them as well.

In Boston two official proclamations were issued in response to the March 1737 market riot, one by Lieutenant Governor Spencer Phips (1685-1757) and the other by Governor Jonathan Belcher (1682-1757). Both, as expected, denounced the rioters. But Belcher’s proclamation was highly unusual in one regard. It printed the full texts of another important, but completely unofficial, medium of public communication: a manuscript open letter. In response to the first proclamation by the lieutenant governor, the mob leaders had circulated handwritten copies of their own proclamation around town and posted one on the town house door. (No original copies survive.) They demanded that the authorities abandon their efforts to arrest the “good Fellows” who had pulled down the markets. Further investigations, they said, would bring on a “Bloody Ending” and perhaps “Civil War.” They also wrote an open letter to the sheriff of Suffolk County boasting that hundreds of men were ready to resist any use of force against them. The local newspaper editors, who had been wary of publishing the rioters’ words, were delighted to publish them once the governor himself had printed them in his own official proclamation.

By His Excellency Jonathan Belcher, Esq;...A Proclamation. Whereas on the Twenty-fifth Day of March last...the Lieutenant Governour...issued a Proclamation for discovering and apprehending the Persons concerned...

J. Draper, printer to his excellency the governour and Council.