A Poem Occasioned by the untimely Death of Hugh Henderson, alias John Hamilton, who was Hangd at Worcester for House-Breaking. Nov. 24. 1737. 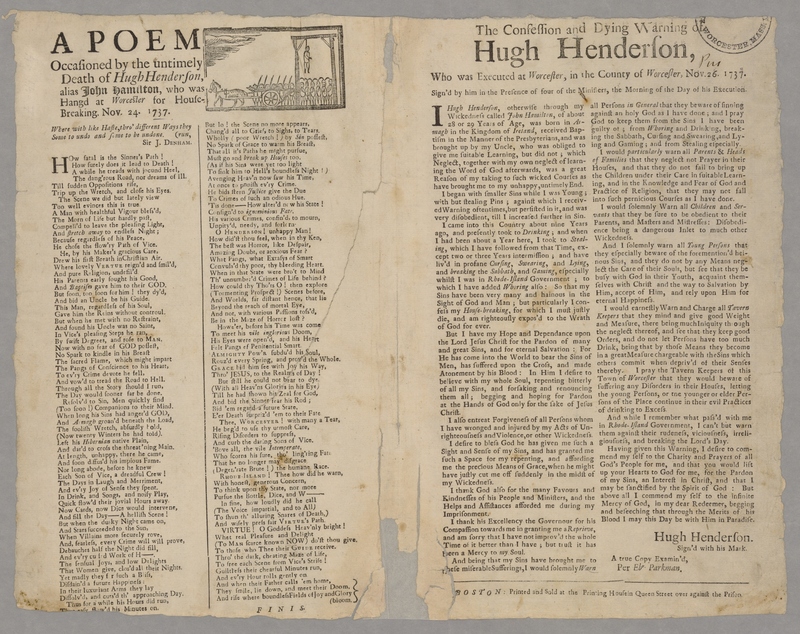 Public executions had long been popular news events in Europe, and they fit well into the news environment of Puritan New England. They were sensational, which appealed to the voyeurism of audiences, but they were also morally instructive, which appealed to the religious sentiments of public officials and ministers. And printers liked executions because accounts of them could be sold in news broadsides, sermons, and newspapers. Indeed, one of the first products of the first commercial press in Boston in 1675 was a sermon on the execution of two men for murder. The author was New England’s most famous collector and interpreter of providential news events in that era: Reverend Increase Mather (1639-1723).

In 1737 the execution in Worcester of a habitual criminal named Hugh Henderson was reported in Boston. (There was no printing press in Worcester at that time.) The coverage appeared in three different media formats: broadside, sermon, and newspaper. The broadside, typically a small sheet printed on one side, was a favored medium for getting a news story out quickly, cheaply, and profitably. This one includes both a cautionary poem and Henderson’s confession, which covered the standard list of sins driven by drink: cursing and swearing, gaming, Sabbath-breaking, whoring, robbery, and burglary. The confession was published by the Boston printers Samuel Kneeland (1697-1769) and Timothy Green (1703-63) in two formats: first as a broadside and then as an appendix to the sermon preached by Reverend John Campbell (1691-1761) at Henderson’s execution. The broadside, which reused a woodcut that Kneeland and Green had used in 1734, was rushed into print and available for sale in time for the execution. The execution itself was reported in the Boston newspapers, most fully in the Weekly Journal, which was also published by Kneeland and Green. The printers even tucked an ad for their broadside into the middle of the Journal’s December 6th story on the execution. An anonymous Boston newspaper indexer was a Kneeland and Green customer: he listed both the broadside and the newspaper story in his 1737 index.

A Poem Occasioned by the untimely Death of Hugh Henderson, alias John Hamilton, who was Hangd at Worcester for House-Breaking. Nov. 24. 1737.

“A Poem Occasioned by the untimely Death of Hugh Henderson, alias John Hamilton, who was Hangd at Worcester for House-Breaking. Nov. 24. 1737.,” The News Media and the Making of America, 1730-1865, accessed May 24, 2022, https://americanantiquarian.org/earlyamericannewsmedia/items/show/108.