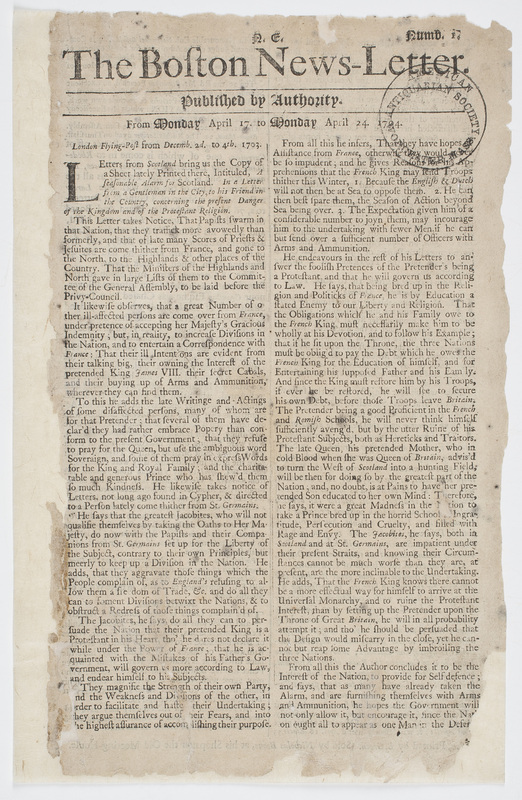 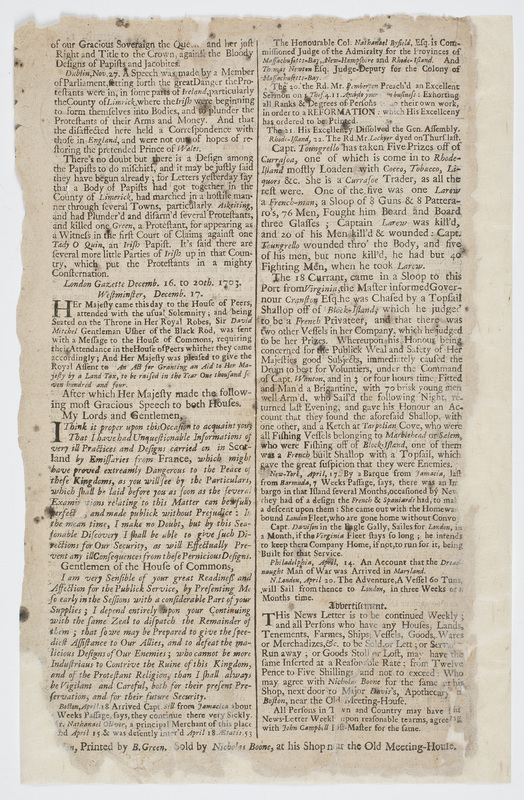 The Boston News-Letter was the first newspaper in America to survive beyond its first issue. Indeed, it survived for seventy-two years as a fixture of the Boston publishing scene. The founding editor and publisher was John Campbell (1653-1728), who was the Boston postmaster. With the arrival of newspapers and letters from abroad and with the chatter of local people picking up their mail, a post office was always a nexus for news. For several years after 1700, Campbell gathered such information and summarized it in a handwritten newsletter. In April 1704, he contracted with local printer Bartholomew Green (1666-1732) to print his newsletter; printing allowed for a wider circulation than was possible with handwritten copies, though for years the circulation rarely exceeded three hundred. Unlike Benjamin Harris, Campbell was a sycophant of the colonial establishment, and he prominently displayed the phrase “Published by Authority” at the top of the first page, exactly like the official London Gazette. Though printing was no longer formally licensed in Massachusetts, Campbell took no chances.

This is the first printed issue of the Boston News-Letter. It suggests what would be the standard format of the American newspaper in the early eighteenth century: a single sheet, printed in two columns, front and back. The News-Letter begins with English and European news culled from London papers, but a smidgen of Boston, New York, Philadelphia, and Connecticut news is included as well. At the end of the second page, Campbell implores his readers to buy advertising at a “Reasonable Rate,” though newspaper advertising would not bring in much revenue until the nineteenth century.

“The Boston News-Letter,” The News Media and the Making of America, 1730-1865, accessed February 6, 2023, https://americanantiquarian.org/earlyamericannewsmedia/items/show/116.