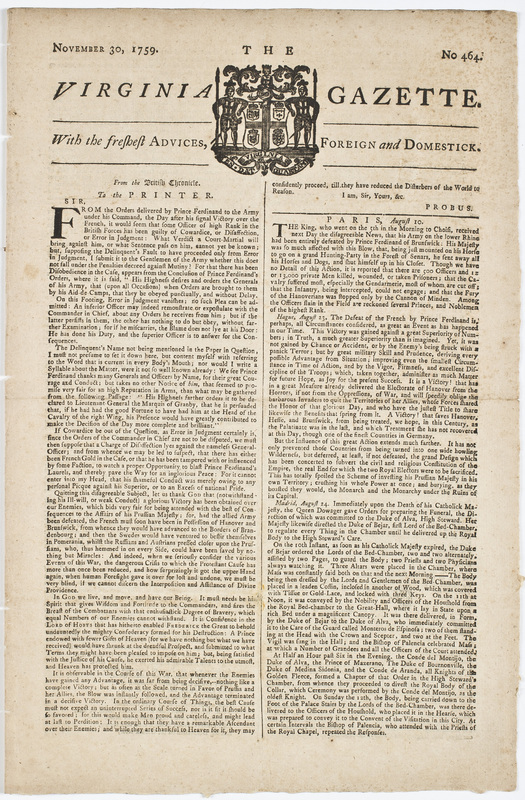 The first newspaper in America south of the Potomac River was the Virginia Gazette, founded by William Parks (1699-1750) in 1736. Parks, who had previously operated a print shop and published a newspaper in Maryland, brought printing to Williamsburg in 1730 and served as public printer to the governor and assembly. The Gazette was a kind of “court” newspaper, modeled on the London Gazette and dedicated to mostly European news and government notices. The paper ceased publication when Parks died in 1750 but was reestablished in 1751 by William Hunter (d. 1761). The official public-printer role of Gazette publishers became more difficult as the political life of Virginia became more fractious in the 1750s. Indeed, for several years in the 1760s and 1770s, two newspapers bearing the name “Virginia Gazette” competed with each other, each promoting a different political interest in the colony.

This 1759 issue of the Virginia Gazette offers a glimpse of a year of dramatic news in both Europe and America: the height of the Seven Years’ War. The first two pages carry war news from a variety of sources in London, Boston, and New York. And this issue even has a poetic elegy to General James Wolfe, who was killed in the momentous Battle of Quebec in September: “Thy Merits, Wolfe, transcend all Human Praise.” Pages 3 and 4 carry the usual official news from Williamsburg, as well as a good deal of advertising. The ads are typical, running the gamut from shipping notices to sundry imported goods to runaway horses. For the modern reader, the ads for slave sales are perhaps the most haunting and most revealing of the nature of eighteenth-century American society, especially in the South. For example, on page 3 one ad begins: “To be SOLD at publick Auction . . . Several choice grown Negroes, Horses, Colts, &tc.”

“The Virginia Gazette,” The News Media and the Making of America, 1730-1865, accessed May 29, 2020, https://americanantiquarian.org/earlyamericannewsmedia/items/show/117.