By the Governour & Council. Whereas some have lately presumed to Print and Disperse a Pamphlet, Entituled, Publick Occurrences 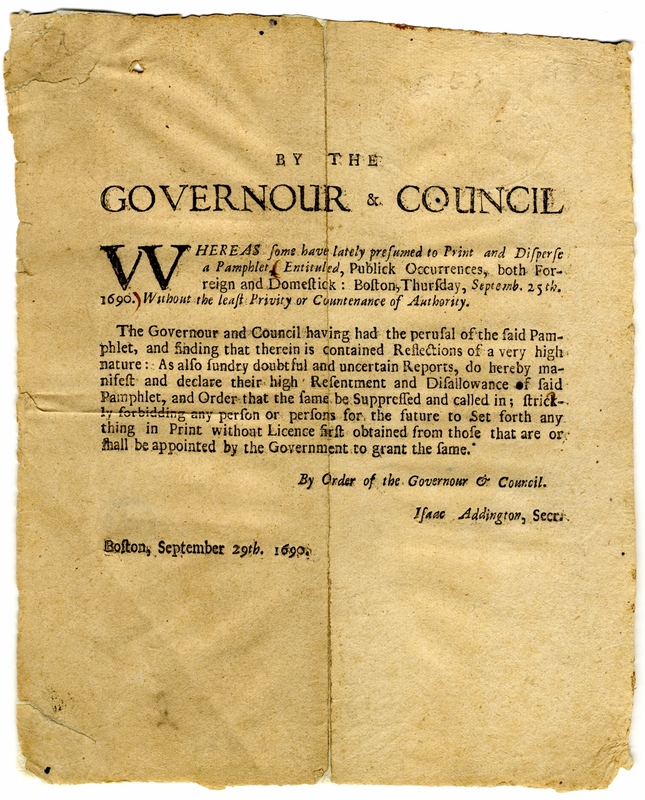 In 1690, a recent immigrant to Boston, Benjamin Harris (d. 1716), decided the time was right to launch a newspaper. In the wake of the Glorious Revolution of 1688 and the royal regime change in England, colonists longed for news from home. Harris, who had been a printer and publisher in London and now ran a bookstore and coffeehouse in Boston, recognized this need. His fledgling newspaper was called Publick Occurrences, Both Forreign and Domestick. The paper looked like an English newspaper and had an array of news from Europe and America. Harris promised that it would appear “once a month (or if any Glut of Occurrences happen, oftener)” and would include accounts of the “Circumstances of Public Affairs” as well as “Memorable Occurrences of Divine Providence.”

But the first issue of Publick Occurrences was also the last. The paper was suppressed by the colonial authorities in Massachusetts and never appeared again. Most copies of the paper were destroyed; the only known surviving copy is in the Public Record Office in London. But several copies of the broadside cease-and-desist order have survived, such as the one shown here. It is not entirely clear what the governor and council found objectionable, but certainly the most important objection was that the paper was published without their approval. At that time, Massachusetts had a licensing system in force, and the authorities looked over the shoulders of all the printers in the colony. By the eighteenth century licensing for printing had ended in both Britain and America.

By the Governour & Council. Whereas some have lately presumed to Print and Disperse a Pamphlet, Entituled, Publick Occurrences

By the Governour & Council. Whereas some have lately presumed to Print and Disperse a Pamphlet, Entituled, Publick Occurrences, both Forreign and Domestick: Boston, Thursday, Septemb. 25th. 1690. Without the least Privity or Countenance of Authority.

Massachusetts Governor (Bradstreet, Simon, 1689-1692), “By the Governour & Council. Whereas some have lately presumed to Print and Disperse a Pamphlet, Entituled, Publick Occurrences,” The News Media and the Making of America, 1730-1865, accessed May 26, 2020, https://americanantiquarian.org/earlyamericannewsmedia/items/show/31.