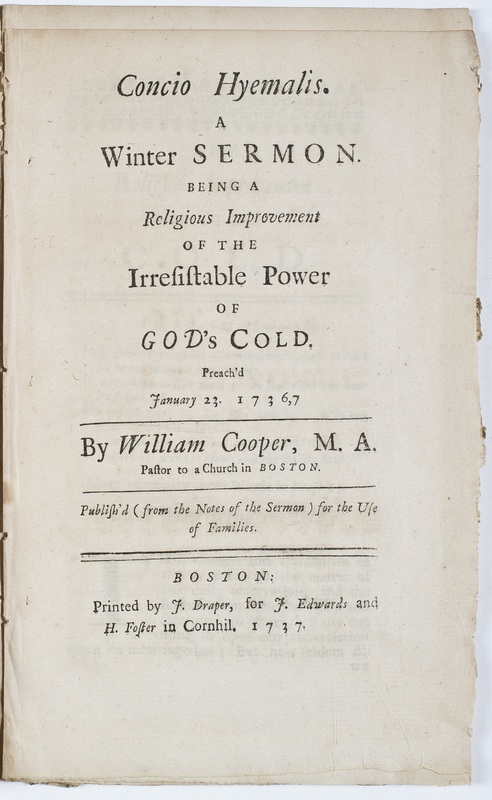 From 1716 until his death in 1743, William Cooper (1694-1743) was Benjamin Colman’s colleague in ministry at Boston’s Brattle Street Church. Like Colman and like Thomas Prince at Old South Church, Cooper frequently preached on current events, including natural occurrences, which he believed were laden with religious significance. Cooper shared Prince’s fascination with the natural sciences as well as his devotion to the doctrine of divine providence.

The most striking natural occurrence in Boston in 1737 was the extraordinarily cold weather. Cooper took the “Irresistable Power of God’s Cold” as his subject in a sermon preached in January. In the sermon, Cooper struggles to explain the science of cold to his shivering listeners; the published version of the sermon even includes a footnote to Robert Boyle’s 1665 Experimental History of Cold. But the physical causes of cold—“frigorisick particles,” Cooper hypothesizes—were but “second causes only.” God was the “first cause,” and “these particles are of God’s making.” And what message did God send with his cold? According to Cooper, the frigid winter was a display of God’s restraint as well as his power. Yes, some Bostonians had frozen to death, but the city so far had been spared the communal judgment of a major fire, which, he said, loomed as a serious threat with town pumps and docks frozen. But perhaps most important, God’s cold called people to charity. “Next to the love of God,” Cooper declares, “we shou’d keep up a warm love to our neighbour . . . . Therefore the colder the season is, the warmer shou’d our charity be; for then the needs of the poor are greatly increased.”

Click the image below to browse the full pamphlet.

Concio Hyemalis. A Winter Sermon. Being a religious improvement of the irresistable power of God's cold. Preach'd January 23. 1736,7

Printed by J. Draper, for J. Edwards and H. Foster