The last Speech and dying Advice of poor Julian, Who was Executed the 22d of March, 1733. for the Murder of Mr. John Rogers of Pembroke. 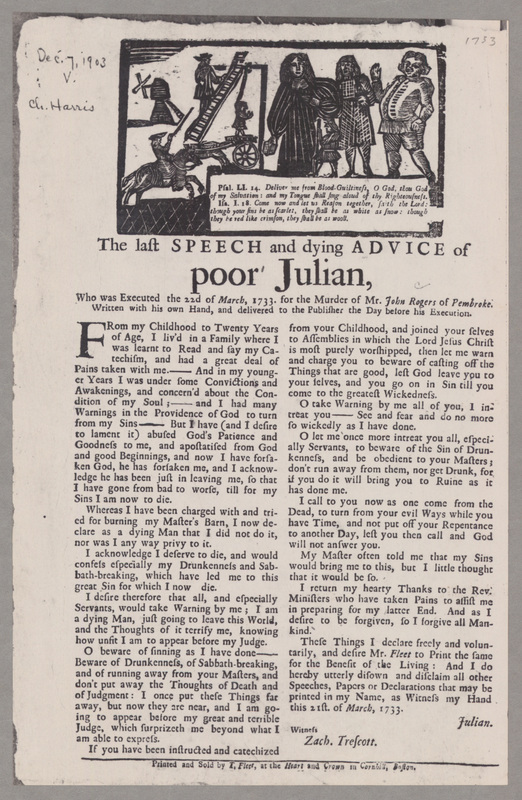 One genre of news broadside in colonial America, quite different in quality from the elegantly printed government proclamation, was the confession or “last speech” of a condemned criminal. These were typically small sheets, printed quickly on cheap paper, and designed for popular sales. They followed a formula similar to a religious conversion narrative: the condemned man acknowledged his crimes, showed contrition, accepted his punishment, and sought redemption. He also typically implored others not to follow his path to ruin. From the earliest days of commercial printing in Boston in the 1670s, execution sermons had been a staple of the press. But confession or “last speech” broadsides were different: they were written in the voice of the condemned man himself. These broadsides gained popularity in the 1730s and gradually evolved into the sensational and fully secular crime literature of the nineteenth century.

Poor Julian is an early example of a “last speech” broadside printed in Massachusetts. Julian was a Native American held as a servant (probably a slave) who had escaped captivity. He was recaptured, but then he killed the bounty hunter who was returning him to his master. In his speech, Julian warns other servants to “beware of Drunkenness, of Sabbath-breaking, and of running away from your Masters.” Three competing broadsides were published about this one execution. In this version, Julian thanks Thomas Fleet (1658-1758), the Boston bookseller who arranged for its publication, and he disavows the other broadsides as inauthentic frauds. Fleet was not a printer himself, but he had a good eye for what would sell, and he frequently played the role that would later be termed “publisher.” In the end, were these the actual words of “poor Julian”? No one knows.

The last Speech and dying Advice of poor Julian, Who was Executed the 22d of March, 1733. for the Murder of Mr. John Rogers of Pembroke.