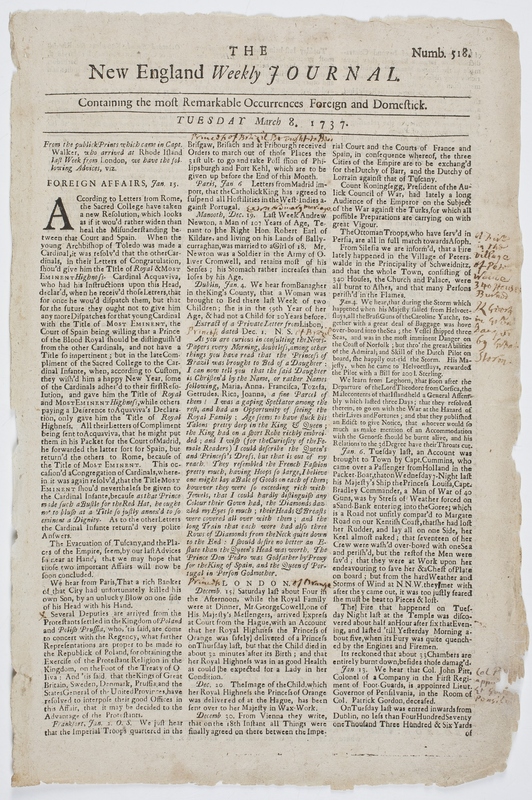 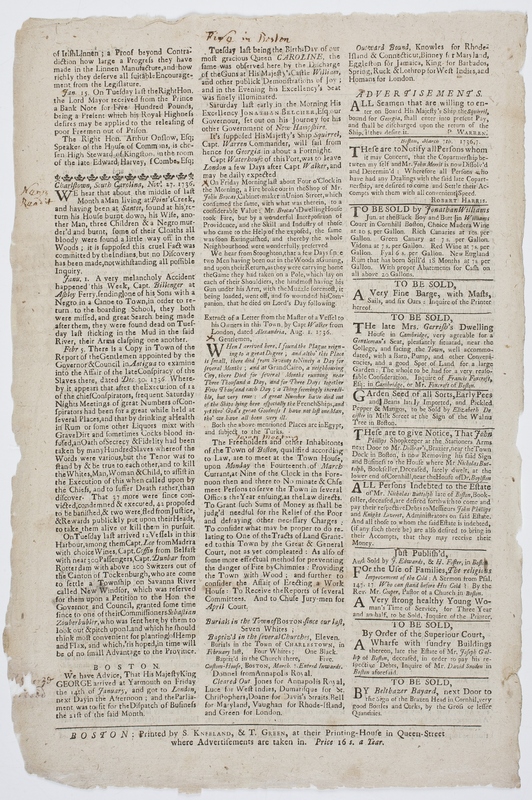 The New England Weekly Journal was founded in 1727 as a literary paper, along the lines of the Spectator in London and New England Courant in Boston, the newspaper that launched the career of Benjamin Franklin. But the Weekly Journal was more aligned with the local religious establishment than the Courant had been. One of its founders and an occasional contributor was Thomas Prince, who cared more about providential news and religious revival than the clever satire that characterized much of the Courant’s content. For example, the Weekly Journal devoted much attention to the earthquake of 1727 and to the revivals that began in the 1730s at Northampton, led by Rev. Jonathan Edwards (1703-58). The Weekly Journal’s printers were Samuel Kneeland (1697-1769) and Timothy Green (1703-63), who also published many sermons and pamphlets on religious revivals. Kneeland was a member of Prince’s church.

By 1737 the New England Weekly Journal had become less literary and more newsy, with the usual assortment of European news culled from London newspapers, items from other American colonies, and local Boston news. The news often recounted events that seemed to carry providential meaning. For example, the Weekly Journal devoted more attention than other Boston papers to the execution of Hugh Henderson. Henderson’s jailhouse repentance was the central theme of the newspaper’s coverage and of a sermon and poem written for the event, all published by Kneeland and Green. During the brutally cold winter of 1737, the newspaper carried many short news items from Boston and from around the country about fires and deaths. This March 8, 1737, issue has an item about the fire in John Brocas’s woodworking shop, as well as a preview story about an upcoming town meeting, always an important venue for the making and sharing of news. At the March town meeting, the citizens of Boston were expected to discuss two vital issues of public policy made more serious by the severe winter cold: “some more Effectual method for preventing the Danger of Fire by Chimneys” and “Providing the Town with Wood.”

“The New England Weekly Journal,” The News Media and the Making of America, 1730-1865, accessed October 29, 2020, https://americanantiquarian.org/earlyamericannewsmedia/items/show/104.