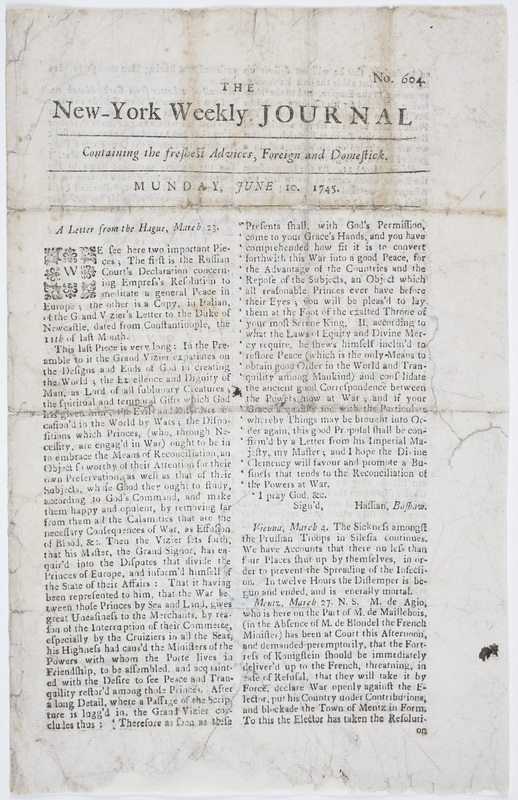 The first newspaper in New York was the New-York Gazette, founded in 1725 by William Bradford (1663-1752). The New-York Weekly Journal appeared eight years later, and from its beginning it was more than a business competitor to the Gazette; it was a political adversary. In the 1730s, New York was the most politically fractious of the British American colonies, and the Weekly Journal represented the faction of Chief Justice Lewis Morris (1671-1746) against Governor William Cosby (1690-1736). The printer of the Journal, John Peter Zenger (1697-1746), is remembered and celebrated because it was he, not the actual writers of the paper’s political essays, who ended up being prosecuted for seditious libel at the behest of the governor in 1734. Zenger’s acquittal became a cause célèbre in the history of press freedom in colonial America and beyond.

After his acquittal, Zenger made his paper less an organ of political faction and more a standard newspaper. The 1745 issue seen here is an example of the Journal in the last year of Zenger’s editorship; he died the next year. It illustrates how war—in this case, King George’s War—could thoroughly dominate the news. In 1745 a New England force was mounting a siege of the French fortress at Louisbourg on Cape Breton Island at the Gulf of St. Lawrence. The Journal reported the news of this important expedition mainly by gathering news from Boston, much as Benjamin Franklin was doing in Philadelphia. This war with France and the later Seven Years’ War of the 1750s and 1760s did not produce an American patriotism in the British colonies. But they did produce among the colonies a sense of shared American interest and identity. From New England down the Atlantic seaboard, newspapers shared and reprinted North American news for people who were beginning to think of themselves as Americans.

“The New-York Weekly Journal,” The News Media and the Making of America, 1730-1865, accessed September 30, 2020, https://americanantiquarian.org/earlyamericannewsmedia/items/show/109.