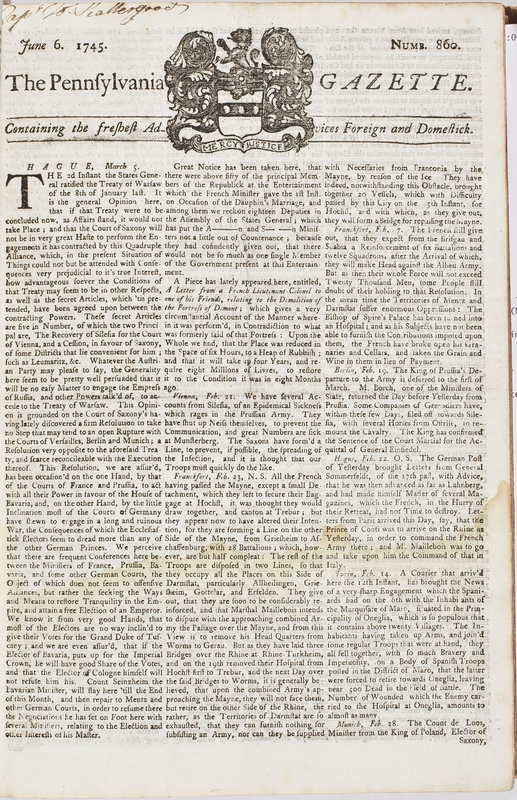 Biographers and historians agree that Benjamin Franklin (1706-90) was the best journalist in colonial America and his Pennsylvania Gazette the best newspaper. Founded in 1728, the Gazette was the second newspaper to be produced in Philadelphia. In 1729, the twenty-three-year-old Franklin and a partner, Hugh Meredith (ca. 1697- ca. 1749), bought the struggling paper and quickly turned it into a well-written, well-edited, and well-printed newspaper. In format, Franklin’s Pennsylvania Gazette was like other colonial American newspapers. The emphasis was on news, not literary or political essays, and most of that news was copied from European papers. But Franklin had a knack for selecting, editing, and rewriting. And, if his autobiography is to be believed, the Gazette “prov’d in a few Years extreamly profitable.”

This 1745 issue of the Pennsylvania Gazette is typical in some ways, atypical in others. As usual, the paper is filled with European news of war and diplomacy. But in 1745 some important war news came to Philadelphia via Boston. Under a “Boston” heading, the Pennsylvania Gazette reported the big news of the day: the siege of the French fortress at Louisbourg on Cape Breton Island at the Gulf of St. Lawrence, mounted mainly by New Englanders. This issue of the Gazette is quite unusual in that it has two extra pages and a woodcut map, a “PLAN of the Town and Harbour of LOUISBOURGH.” This map, probably cut by Franklin himself, marks the first illustrated news story in American journalism. Yet in the midst of much serious war news, a bit of Franklinesque fluff also appears: “They write from Paris, that the Diamonds of the Lords and Ladies of the Court at Versailles, at the grand Ball on the 25th of last Month, were valued at 250 Millions, which is near 12 Millions Sterling.”

“The Pennsylvania Gazette,” The News Media and the Making of America, 1730-1865, accessed August 14, 2020, https://americanantiquarian.org/earlyamericannewsmedia/items/show/110.