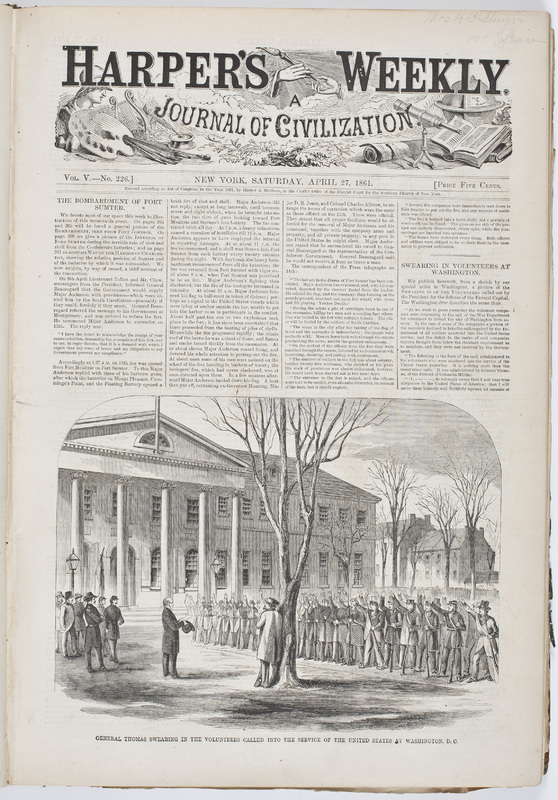 Harper Brothers publishing house in New York set the standard for illustrated magazines with the inauguration of its very popular Harper’s Monthly Magazine in1850, a staid literary magazine aimed at a broad but genteel reading public. This publication demonstrated that illustrations were now an indispensable element for a successful periodical, and after Frank Leslie (born Henry Carter; 1821-80) established Frank Leslie’s Illustrated Newspaper in 1855 with some success, Harper Brothers soon followed with its own pictorial weekly, Harper’s Weekly, in 1857. Unlike Leslie’s, which focused heavily on news events and at times even sensationalism, Harper’s followed the model of its magazine forebear, carrying less news and more literary content, and an utterly respectable reputation.

In the years leading up to the Civil War, Harper’s tried to avoid discussion of the mounting sectional crisis and was generally placating when it did touch upon the subject. Over the course of the war the paper would become increasingly pro-Union and staunchly Republican, but in the early days, as can be seen in this April 27, 1861, issue featuring the bombing of Fort Sumter, the weekly was still trying to cautiously tread middle ground. The cover story on the bombardment gives an outline of the crisis, but withholds any strong judgments about culpability. The article that accompanies the cover illustration, which features the swearing in of new volunteers in Washington, D. C., mostly reports the facts about the gathering of troops. The graphic images of the bombing of Fort Sumter are from both the Confederate and Union perspectives.

But, as a note about “Our Illustrations of the War” on the second page attests, the conflict could no longer be ignored. As if making up for earlier lost opportunities and sensing the necessity of covering what was yet to come, the proprietors stake their claim in the pictorial market: “In view of the momentous events which are impending, and of the actual outbreak of civil war, the proprietors of Harper’s Weekly beg to draw public attention to the following list of engravings which have been published in this journal within the past few weeks, as evidence of the fidelity and thoroughness with which they are redeeming their pledge to ‘give a well-drawn, well-engraved, and well-printed illustration of every important event that occurs.’”

Other items of interest among the usual poems, humor tidbits, and stories (including a couple of chapters of Charles Dickens’s (1812-70) Great Expectations), are the text of President Lincoln’s (1809-65) proclamation of war and an editorial about it; responses from the various states to Lincoln’s call for volunteers; a biography and portrait of the Confederate General P. G. T. Beauregard (1818-93); a map of Charleston Harbor; and a feature about Lincoln accompanied by an engraving—“the first accurate portrait that has been published of him since he began to grow his beard.”

“Harper's Weekly,” The News Media and the Making of America, 1730-1865, accessed April 9, 2020, https://americanantiquarian.org/earlyamericannewsmedia/items/show/124.