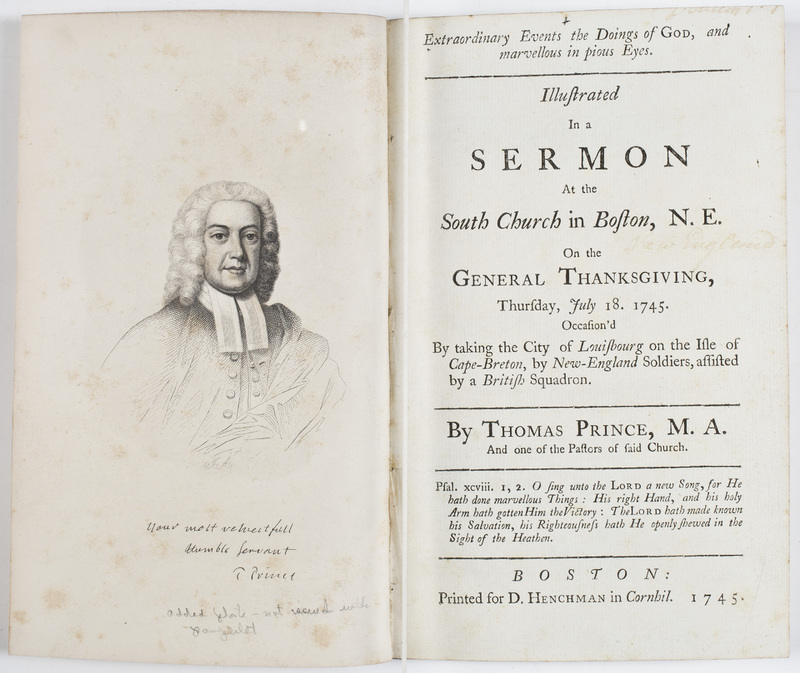 Thomas Prince (1687-1758), the senior minister of Old South Church in Boston from 1718 until his death in 1758, was a leading American proponent of the new natural sciences and the British Enlightenment. Yet he was a theological conservative who hoped to preserve the traditional Puritan doctrine of God’s active role in nature and in New England history and life. Many of his sermons and other writings were, in a sense, a species of journalism: like the work of Increase (1639-1723) and Cotton Mather (1663-1728) before him, they were descriptions of and meditations upon current events. In these sermons, he presented what he took to be scientific disquisitions on how God could guide natural and human events in a way that was consistent with the laws of nature. In addition to sermons and histories, Prince also created, in collaboration with his son, the first successful magazine in America. The Christian History, launched in 1743, reported the news of the religious revivals of the so-called Great Awakening.

This Prince sermon is an account of the Siege of Louisbourg on Cape Breton Island in 1745. It is an example of news as divine providence. Prince argues that the victory of the New England expeditionary force was the result of natural occurrences and forces, yet it was divinely ordained. The patterns of events—“trains of coincidence,” he calls them—revealed the hand of God. “Some extraordinary Events,” he writes, “without being properly term’d miraculous, have such lively Characters of their being the Doings of GOD.” Though Prince attributes the New Englanders’ success at Louisbourg to God, he also lavishes praise on Massachusetts Governor William Shirley (1694-1771), who had organized the expedition. For loyal English subjects such as Thomas Prince, English governors and monarchs frequently enacted the will of God.

Click the image below to view a portion of this sermon.

Extraordinary Events the Doings of God, and Marvellous in Pious Eyes. Illustrated in a sermon at the South Church in Boston, N.E. on the general Thanksgiving, Thursday, July 18. 1745.