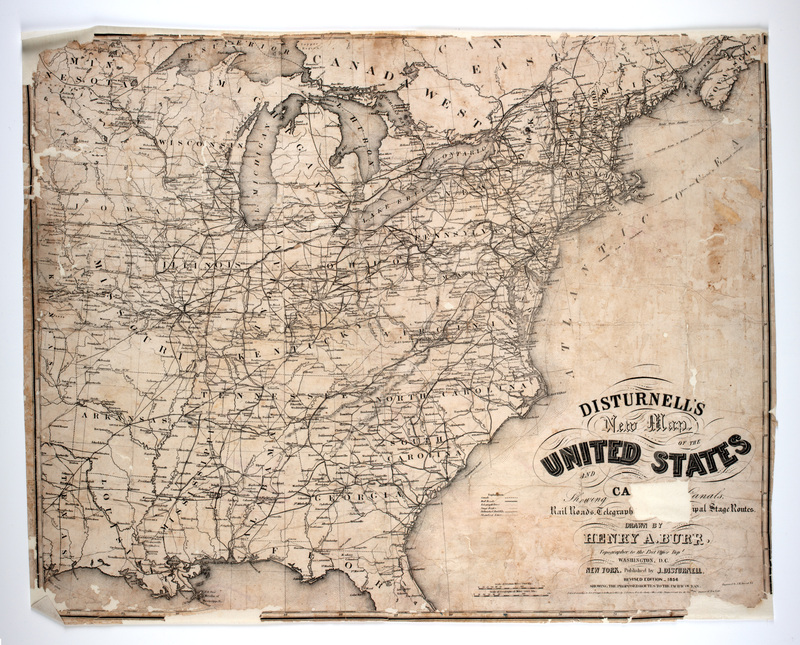 The rapid expansion of new modes of transportation and communication technology that increasingly connected the American states is evident in this 1856 Disturnell’s New Map of the United States and Canada. Drawn by Henry A. Burr, the topographer to the Post Office Department in Washington, D.C., and published by J. Disturnell (1801-77) in New York, this map highlights working railroads, telegraph lines, canals, and stagecoach routes, but also includes steamboats and unfinished railroad routes in its key. The increasing number of options for travel, as well as their speed and scheduled regularity, transformed the way news and information was disseminated, both publicly and privately. The fact that this map was drawn by the post office’s official topographer also speaks to the crucial part that office played in the development of these new networks.

Burr, Henry A., “Disturnell's New Map of the United States and Canada; Showing All the Canals, Rail Roads, Telegraph Lines and Principal Stage Routes,” The News Media and the Making of America, 1730-1865, accessed July 4, 2020, https://americanantiquarian.org/earlyamericannewsmedia/items/show/131.