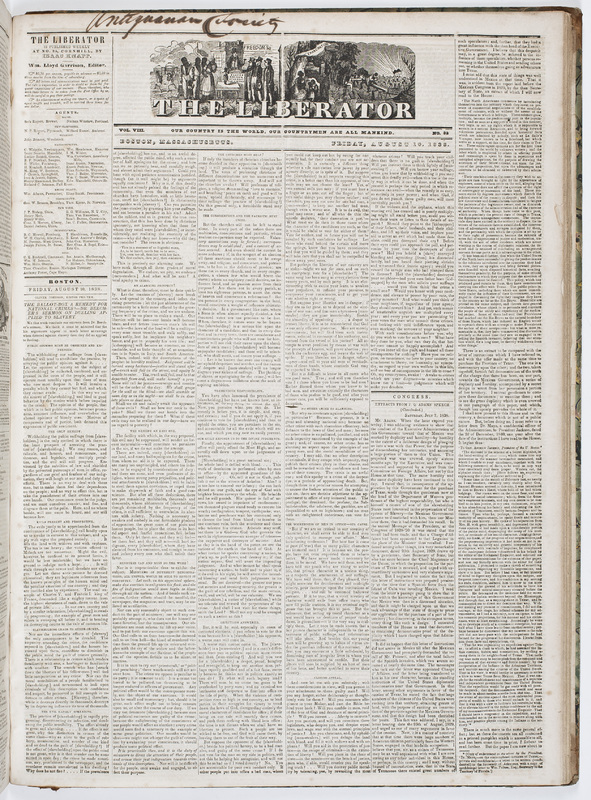 An important category of newspapers in antebellum America was the organizational paper. Every religious or reform movement seemed to have its national and state associations and every association its newspaper. That certainly was true of the abolition movement. The major national association, the American Anti-Slavery Society, depended heavily on organizational newspapers and periodicals.

William Lloyd Garrison’s (1805-79) famous antislavery newspaper, The Liberator, was different. Garrison was often a prominent figure in antislavery and reform societies, but The Liberator was always entirely his own—and that’s what makes it an especially interesting form of journalism. Garrison believed that the role of a newspaper was two-fold: strident agitation and free discussion. He insisted on declaring, in his own sure voice, the truth as he understood it. “My confidence in the unconquerable energy of Truth is absolute,” he wrote. Yet he also made The Liberator an open forum for other voices, including those hostile to his own views. Thus, the paper was always filled with letters, speeches, statements, and rebuttals from all points of view. As Garrison grew to condemn all government as inherently coercive, he idealized journalism as a kind of democracy without coercion. And he believed that “slavery and freedom of the press cannot exist together.”

This issue of The Liberator offers a glimpse of the roles of journalism that Garrison championed: agitation and discussion. The nameplate banner was always one of the paper’s most provocative forms of agitation. It shows, graphically, two of the worst cruelties of slavery: brutal whippings of slaves and the sale of young children away from their parents. And both of those cruelties are shown happening in the nation’s capital. The stories on the front page include a speech by John Quincy Adams (1767-1848) on Texas and Mexico as well as a clever editing exercise in which Garrison turns a sermon on dueling by Lyman Beecher (1775-1863) into a sermon on slavery.

“The Liberator,” The News Media and the Making of America, 1730-1865, accessed July 12, 2020, https://americanantiquarian.org/earlyamericannewsmedia/items/show/17.