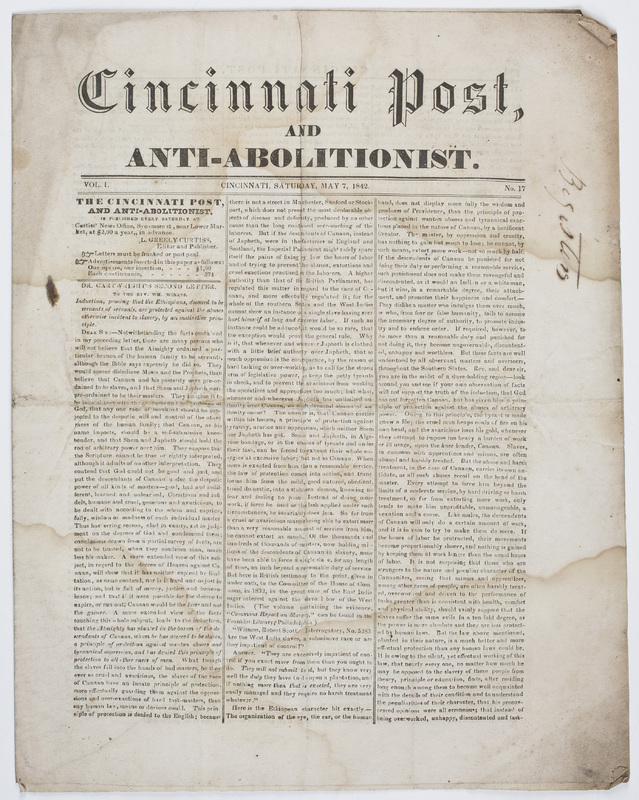 Cincinnati had a powerful pro-slavery faction that published the Cincinnati Post and Anti-Abolitionist, edited by L. Greely Curtiss, from 1841 to 1842. By 1842 the paper boasted that it had the largest circulation of any newspaper in the West. Counted among its subscribers was the Honorable N. C. Read, a member of the Ohio Supreme Court. The newspaper also frequently printed the names of abolitionists in an effort to publicly censure them. According to another sympathetic newspaper from Mississippi, the Guard, the Post was “designed as a check upon the mad proceedings of the abolitionists of the west, and a defense to Southern rights and interests.”

Cincinnati was often at the center of struggles for racial equality in the nineteenth century. Situated just across the Ohio River from the slave-holding state of Kentucky, the city was the scene of three major race riots in 1829, 1834, and 1841. It was also the home of prominent abolitionist author Harriet Beecher Stowe (1811-96) of Uncle Tom’s Cabin fame, who came to Ohio with her father, Lyman Beecher (1775-1863), when he became the first president of the city’s Lane Theological Seminary in 1832. In 1834 Lane was the scene of prominent “debates” on slavery that profoundly impacted the nation’s thinking about the issue.

“Cincinnati Post and Anti-Abolitionist,” The News Media and the Making of America, 1730-1865, accessed May 27, 2020, https://americanantiquarian.org/earlyamericannewsmedia/items/show/18.