Bloody Butchery, by the British Troops: or, The Runaway Fight of the Regulars. 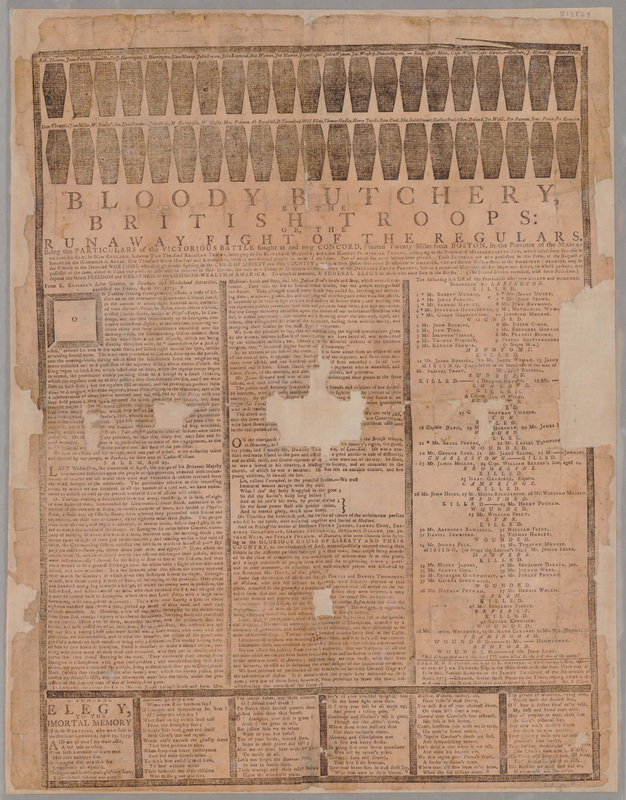 The American account of the events at Lexington and Concord is recounted in this dramatic broadside. Note the heavy black borders and the coffins that adorn the top of the broadside. Both the graphics and the inflammatory prose are designed to incite outrage in the reader and to inspire sympathy with the American cause of the rebellion.

The text of the broadside depicts the British troops as attacking the Americans or “provincials” with a “savage barbarity” that included “shooting down the unarmed, aged, and infirm, they disregarded the cries of the wounded, killing them without mercy, and mangling their bodies.” This broadside also exonerates the Americans, claiming that “not one instance of cruelty that we have heard of was committed by our victorious militia.” Rather, the Americans “listen[ed] to the merciful dictates of the Christian religion. They breathed a higher sentiment of humanity.”

This broadside was printed in Salem, Massachusetts, by Ezekiel Russell (d. 1796), a Boston printer who had moved to Salem in 1774 and established the Salem Gazette. Isaiah Thomas, in his 1810 book, The History of Printing in America, wrote, “A young woman who lived in Russell’s family sometimes invoked the muse, and wrote ballads on recent tragical events, which being immediately printed, and set off with wooden cuts of coffins, etc., had frequently ‘a considerable run.’” It is unknown if this woman authored the elegy that appears at the bottom of this broadside, but it seems quite possible.

A transcription of the broadside can be found here.

Bloody Butchery, by the British Troops: or, The Runaway Fight of the Regulars.

“Bloody Butchery, by the British Troops: or, The Runaway Fight of the Regulars. ,” The News Media and the Making of America, 1730-1865, accessed July 10, 2020, https://americanantiquarian.org/earlyamericannewsmedia/items/show/21.