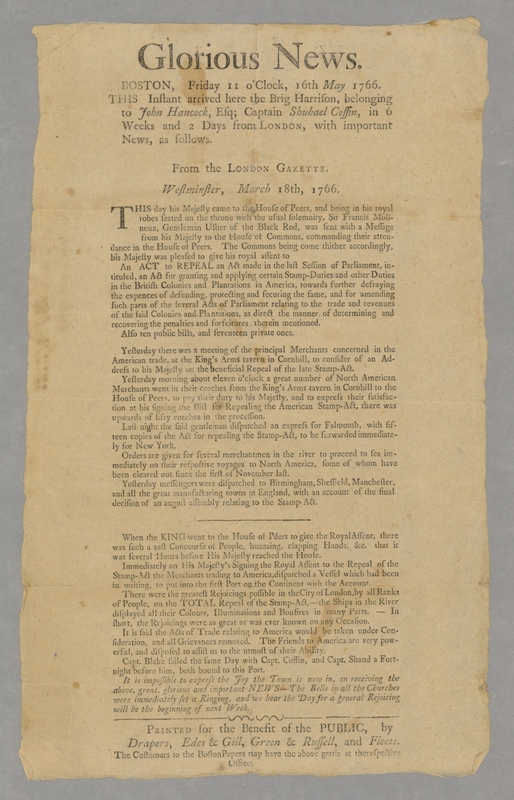 This broadside proclaims the “Glorious News” that on March 18, 1766, the king had given his assent to Parliament’s act to repeal the Stamp Act. In order to authenticate the news, the broadside explains exactly where it came from: a ship of John Hancock’s (1737-93) had just made port from London after six weeks and two days and carried copies of the London Gazette, from which the broadside quotes.

As the second part of the broadside illustrates, the Stamp Act was so hated in London—particularly by merchants who dealt in trade with the Americans—that news of its repeal resulted in public celebrations. Similar celebrations soon broke out in the colonies. As the broadside concludes, “It is impossible to express the Joy the Town [Boston] is now in,” and “The Bells in all the Churches were immediately set a Ringing, and we hear the Day for a general Rejoicing will be the beginning of next week.”

Perhaps what’s most remarkable about this broadside, however, is that excitement on receiving the news was so great that the publishers of the Boston newspapers put aside competition and all worked together to spread the news with no monetary benefit to themselves. The note on the very bottom of the broadside reads, “Printed for the Benefit of the PUBLIC, by Drapers, Edes & Gill, Green & Russel, and Fleets. The Customers to the Boston Papers may have the above gratis at the respective Offices.”