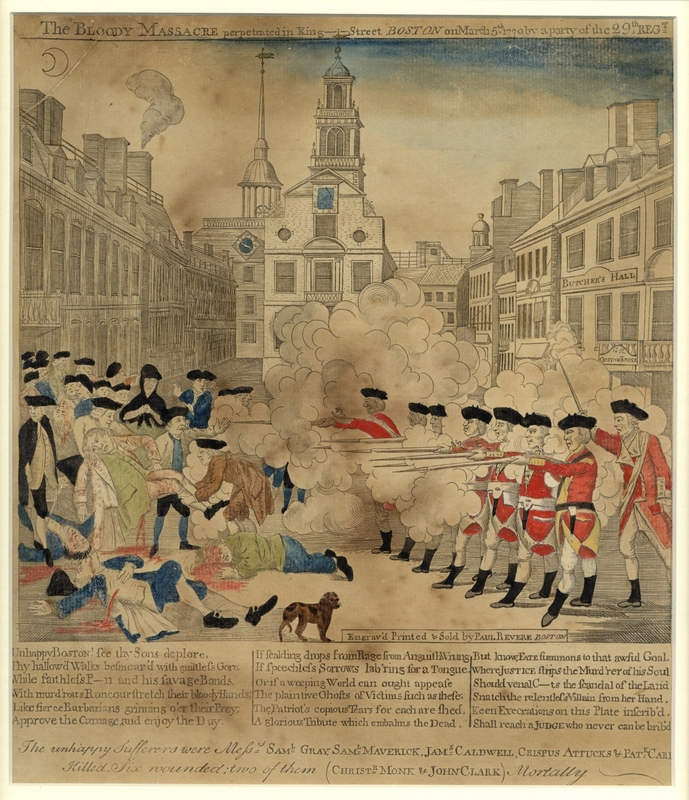 Paul Revere (1734-1818) was a silversmith and engraver born and raised in Boston. Though The Bloody Massacre, often referred to as “The Boston Massacre,” was not Paul Revere’s first foray into using engraving as commentary on news events and politics, it is his most famous. This copy of the engraving was hand-colored by Christian Remick (1725-after 1783), a mariner and artist who hand-colored several of Revere’s prints.

The confrontation on March 5, 1770, that almost immediately became known as the Boston Massacre began when a large group of locals—mainly comprised of sailors and rope makers who felt threatened by British soldiers who were competing for part-time jobs during off-duty hours—started taunting British soldiers with snowballs, stones, and clubs. At the head of this group was Crispus Attucks (ca. 1723-70), probably a runaway slave of African and Native American descent who was working as a sailor and rope maker in the city. Several more British soldiers came to help those already being attacked by the colonists and opened fire on the crowd. It is unclear whether Attucks attacked a soldier first, but he ended up being the first fatality from bullet wounds. Two others, Samuel Gray and James Caldwell, also died during the incident, and Samuel Maverick and Patrick Carr died days later as a result of their injuries. Six others were wounded.

This print is full of inaccuracies. It depicts British soldiers firing on their commander’s orders, clearly insinuating that it was an unprovoked military attack. The colonists are all well dressed and appear to be from the middle and upper classes, rather than from the working class. They are also depicted as being unarmed and helpless, but brutally mowed down regardless. Attucks, if depicted, is not rendered as African American.

Despite its inaccuracies, this engraving is Revere’s most well-known print and the most referenced image of the event. It was an effective propaganda piece, aiming to demonstrate what occupation by the British soldiers meant for the colonists. And unlike his earlier print depicting the landing of the British troops in Boston, which only subtly criticized the British in the accompanying text, Revere makes his opinions very clear through the poem below the image here. It begins:

Unhappy Boston! see thy Sons deplore
Thy hallow’d walks besmear’d with guiltless gore
While faithless P____n [Captain Preston] and his savage bands
With murd’rous rancour stretch their bloody hands
Like fierce barbarians grinning o’er their prey
Approve the carnage and enjoy the day.