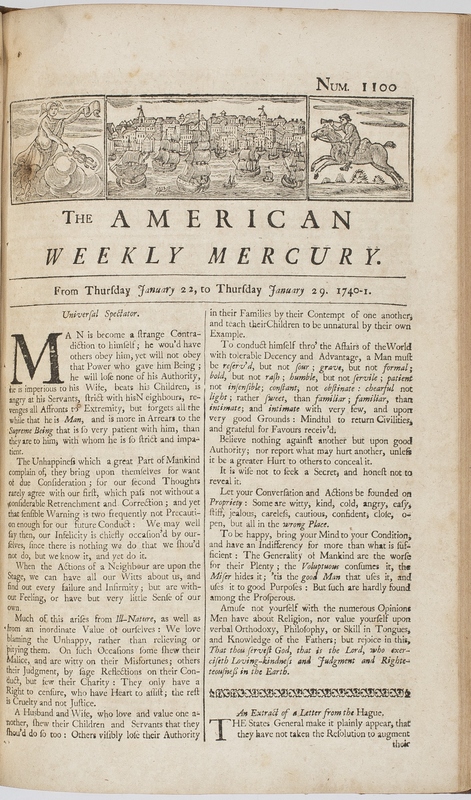 The first newspaper to appear in America outside Boston was the American Weekly Mercury, launched by Andrew Bradford (1686-1742) in Philadelphia in 1719. His father, William Bradford (1663-1752), had opened the first print shop in the new city of Philadelphia in the 1680s, before moving on to New York, where Andrew grew up. Andrew Bradford’s decision to use the word “American” in the name of his newspaper was telling. He intended that the paper would seek readers and advertisers beyond the city of Philadelphia—in Pennsylvania, New Jersey, and even New York. And it did just that. The American Weekly Mercury was the only newspaper outside Boston until 1725, when Andrew’s father started the New York Gazette.

This issue of the American Weekly Mercury is from the last year of Andrew Bradford’s proprietorship. Like most newspapers of the time, it includes mainly European news, but with some attention as well to news from Boston and New York. England was at war with Spain in 1741, so the paper also has a substantial amount of war news from the Caribbean. This issue is also typical in that it includes an essay, a style Bradford began to use in the 1720s when he published young Benjamin Franklin’s satirical “Busy-Body papers.” This particular essay is on manners.

American Weekly Mercury was aimed mainly at the commercial class, with shipping notices and ads for the mercantile trade. The elaborate woodcut banner on the front page nicely illustrates the newspaper’s commitment to news and commerce. The first image in the banner is the Roman deity Mercury, the messenger of the gods and the god of trade and commerce; the second is the Philadelphia waterfront, bustling with ships; the third is a galloping post rider, delivering the Mercury to subscribers far distant from the city. Post riders announced their arrival by blasting on a horn and carried in their pouches not just the “public prints”—newspapers, pamphlets, and broadsides—but personal mail as well. They generally delivered the newspapers to a central location in the community, such as a general store, tavern, or post office where rural subscribers would retrieve them with the rest of their mail when next they came to this location. Printers were often also postmasters and their printing offices were thus communication hubs from which post riders were coming and going.

“The American Weekly Mercury,” The News Media and the Making of America, 1730-1865, accessed June 17, 2021, https://americanantiquarian.org/earlyamericannewsmedia/items/show/29.