In Congress, July 4, 1776. A Declaration by the Representatives of the United States of America, in general Congress assembled. 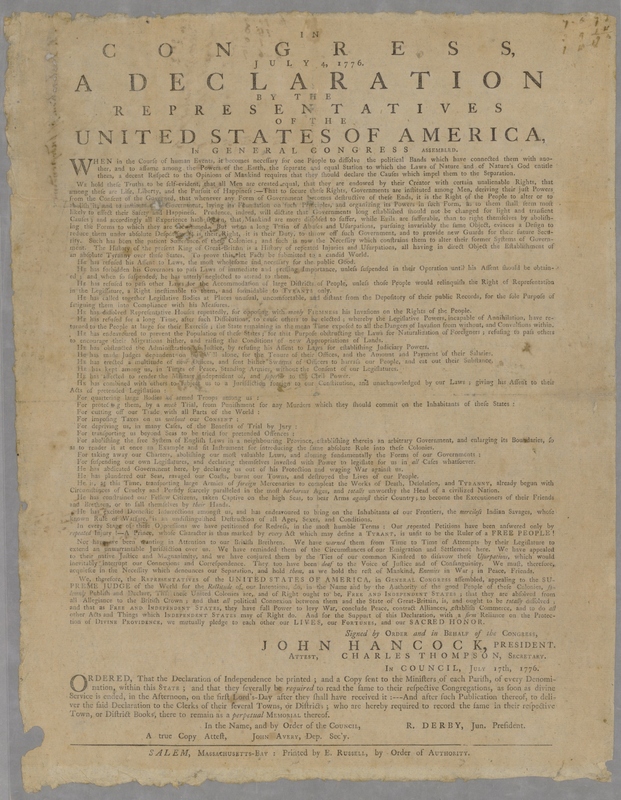 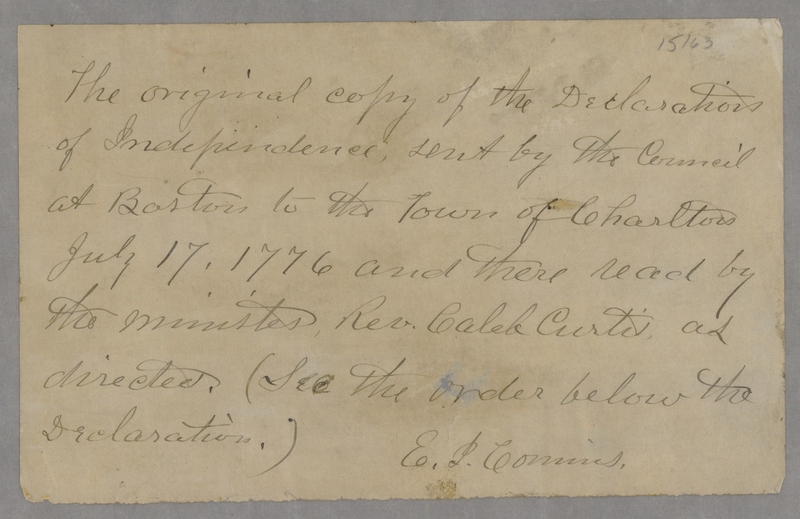 Although it is now the calligraphic version of the Declaration—commissioned by Congress and signed by all the members after it had been accepted by the colonies—that is most familiar today, it was actually through the printed version that the colonies first learned about and agreed to support the Declaration of Independence.

To help disseminate the news, the first printed versions of the Declaration were read aloud to gathered crowds, instantly and exponentially expanding their reach. They also acted as copy for printers throughout the colonies, who immediately started creating their own broadsides and reprinting the text of the Declaration in newspapers. The important ways in which printed and oral dissemination of the Declaration were intertwined in these early days is illustrated in this broadside edition of the Declaration, printed in Salem, Massachusetts, byEzekiel Russell (1743-96) less than two weeks after the Declaration’s approval. Although very similar to other early broadside versions of the Declaration, it has an added paragraph at the bottom beneath the “signatures” of John Hancock (1737-93) and the secretary of the Continental Congress, Charles Thompson (1729-1824). This section states that the Revolutionary Council of the State of Massachusetts ordered this broadside printed and a copy sent “to the Ministers of each Parish, of every Denomination, within this State,” so that they could read the Declaration to each of their respective congregations. After doing so, they were to deliver their copies to the “Clerks of their several Towns or Districts,” who were “required to record the same in their respective Town, or District Books, there to remain as a perpetual Memorial thereof.” With the vast majority of citizens attending church services, the governing body of Massachusetts—now given additional authority with the approval of the Declaration—knew that this would be the best way to reach as many people as possible.

Although in most cases we have no way of knowing if these orders were followed, in this instance a small scrap of paper accompanying the broadside contains a handwritten note that reads, “The original copy of the Declaration of Independence, sent by the Council at Boston to the Town of Charlton July 17, 1776 and there read by the minister, Rev. Caleb Curtis, as directed. (See the order below the Declaration.) E. I. Comins.” The Reverend Caleb Curtis was the town’s first minister, and he was a staunch Whig and active in local politics, serving as a member of Charlton’s Committee of Correspondence. He also preached before the Charlton militia, providing a blessing to them as they headed off to fight the regulars at Lexington and Concord on April 19, 1775. Given this background it follows that Curtis would have been eager to read the Declaration of Independence before his congregation at the first opportunity.

In Congress, July 4, 1776. A Declaration by the Representatives of the United States of America, in general Congress assembled.

E. Russell, by order of authority.

“In Congress, July 4, 1776. A Declaration by the Representatives of the United States of America, in general Congress assembled.,” The News Media and the Making of America, 1730-1865, accessed May 29, 2020, https://americanantiquarian.org/earlyamericannewsmedia/items/show/30.