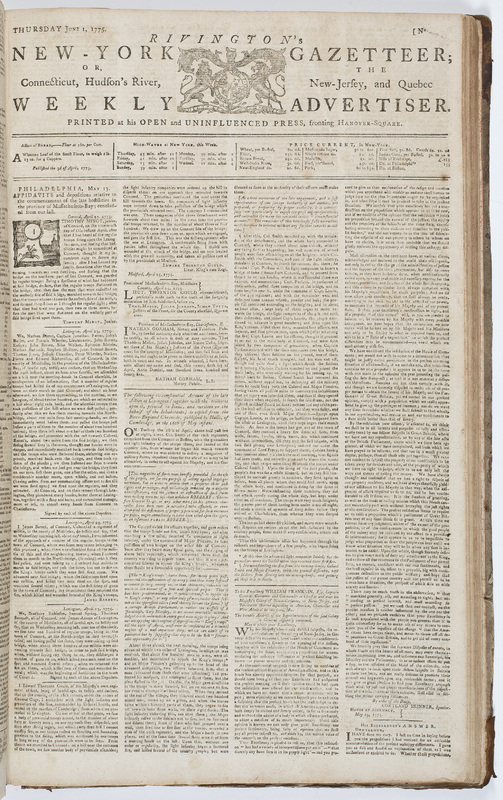 James Rivington (1724-1802), publisher of Rivington’s New-York Gazetteer, was born in London and was a bookseller in his native land before immigrating to the colonies in 1760. He eventually established a bookstore in New York and then ventured into publishing this newspaper in April 1773. The New-York Gazetteer was a leading loyalist paper throughout the war.

This issue is a good example of how news circulated through colonial print culture, the same text often appearing in multiple mediums. Reprints of two other imprints appear side by side on the front page of this issue: The broadsideA Circumstantial Account of an Attack that Happened on the 19th of April 1775, on His Majesty’s Troops, which portrays General Gage’s account of the Battles of Lexington and Concord, is in virtual dialogue with depositions about the battles taken by order of the Massachusetts Provincial Congress expressing the Americans’ side. These depositions would be distributed in July as part of a pamphlet titled A Narrative, of the Excursion and Ravages of the King’s Troops Under the Command of General Gage, on the Nineteenth of April, 1775, published by Isaiah Thomas.

“Rivington's New-York Gazetteer; or The Connecticut, New-Jersey, Hudson's-River, and Quebec Weekly Advertiser ,” The News Media and the Making of America, 1730-1865, accessed July 10, 2020, https://americanantiquarian.org/earlyamericannewsmedia/items/show/37.