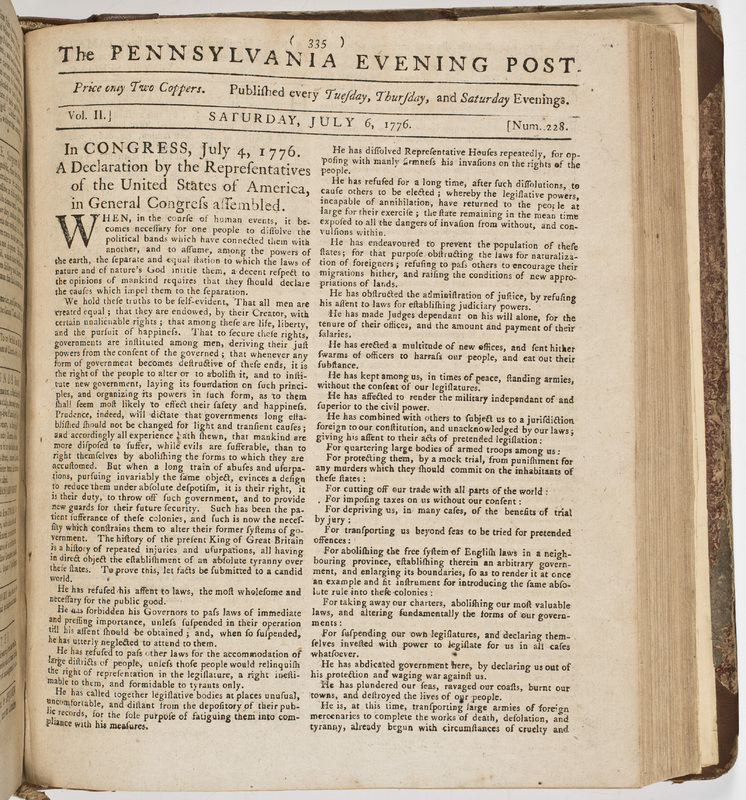 The Continental Congress charged five men with the responsibility to commit to paper the American colonies’ Declaration of Independence from Britain: Thomas Jefferson (1743-1826), Benjamin Franklin (1706-90), John Adams (1735-1826), Robert Livingston (1746-1813), and Roger Sherman (1721-93). Most scholars today now view the authorship of this document to be highly collaborative both among these five individuals (who made forty-seven alterations to Jefferson’s original draft) and among the members of Congress, who made another thirty-nine alterations after voting for independence on July 2, 1776.

After the Declaration was approved on July 4, it was immediately set in type as a broadside and printed overnight by John Dunlap, the official printer to Congress. Copies of the printed version were immediately distributed to all of the colonies, where in some instances they were reprinted by local printers so that by July 18, twenty-four newspapers had republished the text of the Declaration. The Pennsylvania Evening Post, printed by Benjamin Towne (d. 1793), was the first newspaper to include the text in its pages.

“First printing of the Declaration of Independence in a newspaper,” The News Media and the Making of America, 1730-1865, accessed July 10, 2020, https://americanantiquarian.org/earlyamericannewsmedia/items/show/39.