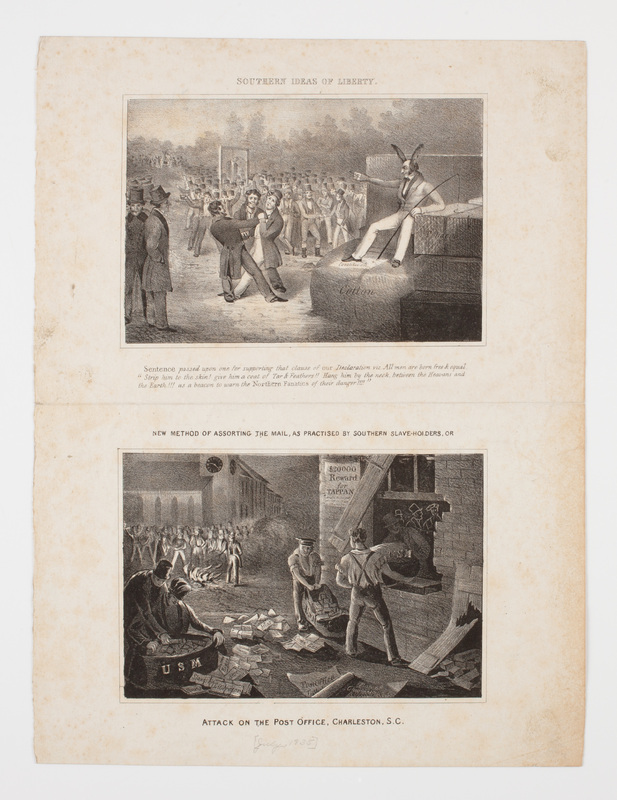 As veterans of the Bible and religious tract movements, the founders of the American Anti-Slavery Society (AASS) believed in the power of the printed word to convert sinners, including those whose sin was slaveholding. Immediately after its founding in 1833, the society began publishing a broad range of newspapers, tracts, circulars, and periodicals. Within two years, AASS was printing more than a million copies a year. In 1835 the society launched a dramatic effort, dubbed the Great Postal Campaign, to flood the South with antislavery tracts and periodicals. This has sometimes been called America’s first direct-mail campaign. In the South the result was not conversion but outrage and hysteria. Though federal postal law guaranteed the security of the mail, Postmaster General Amos Kendall (1789-1869), a close ally of President Andrew Jackson (1767-1845), gave permission to Southern postmasters to refuse delivery of abolitionist materials. Thus, the U.S. postal service, the great nationalizing institution of the American political experiment, became an instrument of states’ rights in the realm of slavery and abolition.

This lithograph shows two examples of “Southern Liberty” from the abolitionists’ point of view: the mobbing of “Northern Fanatics” and the 1835 attack on the post office in Charleston, South Carolina. In Charleston a mob hauled the bags of antislavery publications out of the local post office and burned them. Southerners were especially hostile to the illustrations in antislavery materials, which they feared might fall into the hands of illiterate slaves and incite insurrection. Not surprisingly, then, the abolitionists used illustrations even more extensively in their publications—woodcuts and engravings as well as lithographs. In the Great Postal Campaign of 1835, as well as in many other episodes, the Southern attack on antislavery print media became the subject for more antislavery print media.

New Method of Assorting the Mail, as Practiced by Southern Slave-Holders, or, Attack On the Post Office, Charleston, S.C.

“Attack On the Post Office, Charleston, S.C.,” The News Media and the Making of America, 1730-1865, accessed May 30, 2020, https://americanantiquarian.org/earlyamericannewsmedia/items/show/48.