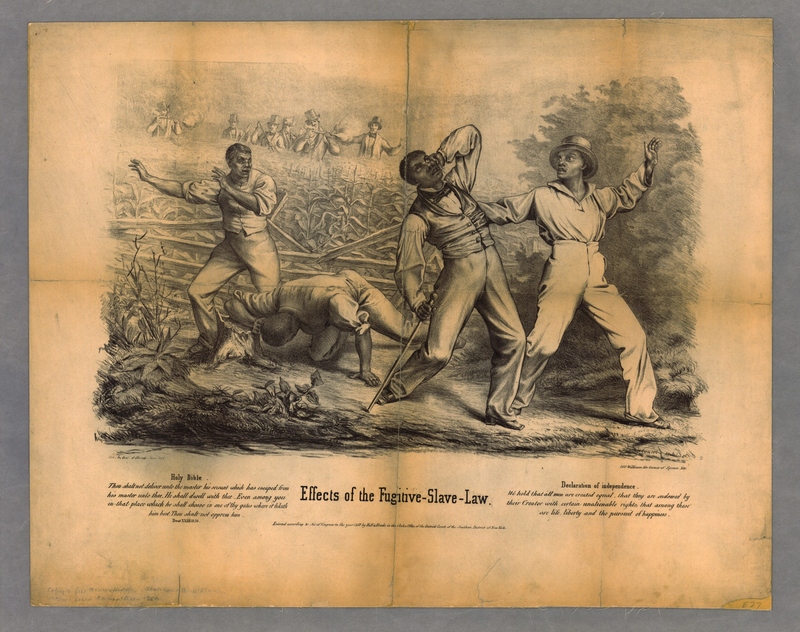 Just as the abolition movement harnessed the power of the printed word in newspapers, periodicals, tracts, and almanacs to spread its antislavery message, it also used printed visuals in the form of lithographs, engravings, and political cartoons. In some cases, these were based on news events related to the slavery question, such as the passage of the Fugitive Slave Act, part of the Compromise of 1850 intended to quell tension between North and South. The act forced citizens to assist in the recovery of escaped slaves, and if they were unwilling to assist or aided a fugitive in escaping, they were subject to a fine and prosecution. Likewise, the act denied fugitives who claimed to be freemen the right to a fair jury trial and put all fugitive cases under federal jurisdiction. Southerners believed that the compromise met its goals in stopping the South from seceding from the Union, at least temporarily. But the compromise made many Northerners more determined than ever to end slavery.

This lithograph, Effects of the Fugitive Slave Law, portrays what many saw as the results of the Fugitive Slave Act. It shows four black men being shot by white men as they tried to escape capture. It is unknown if these black men were free or fugitives, though their relatively polished clothing would suggest they were free. To their pursuers, however, it wouldn’t have mattered, as under the law they could have attempted to capture them anyway. The text under the image on the left side is a quote from the Bible (“Thou shalt not deliver unto the master his servant which has escaped from his master unto thee”), and that on the right is from the Declaration of Independence. Many abolitionists invoked the “all men created equal” clause of the Declaration to argue for the end of slavery.

The artist, Theodore Kaufman (b. 1814), was born in Germany, immigrated to America, fought in the Civil War, and then lived in Boston. He is best known for his Civil War paintings.

“Effects of the Fugitive-Slave-Law,” The News Media and the Making of America, 1730-1865, accessed August 6, 2020, https://americanantiquarian.org/earlyamericannewsmedia/items/show/50.