Death of Col. Edward D. Baker, at the Battle of Balls Bluff 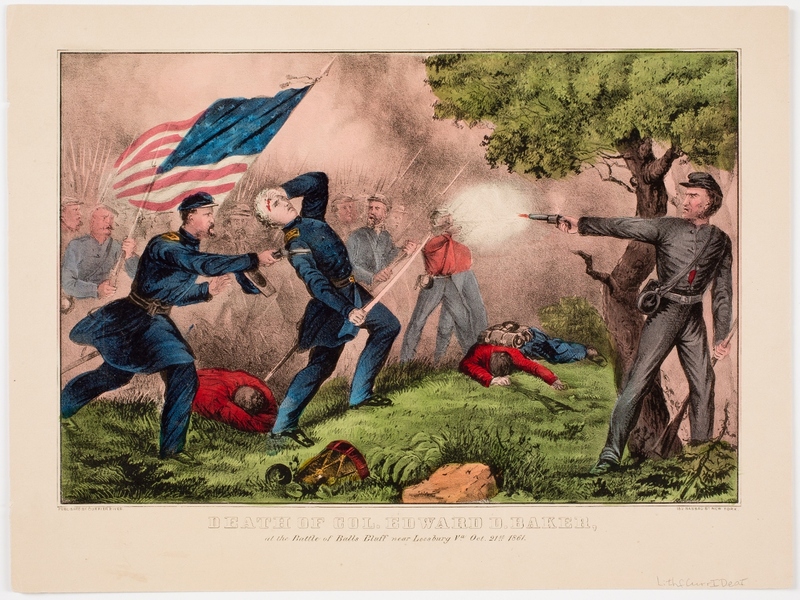 This hand-colored lithograph depicts the dramatic death of Colonel Edward D. Baker (1811-61), the only U.S. senator ever killed in battle. Like Abraham Lincoln, Baker began his political career in Illinois, and the two men developed a strong friendship. Indeed, Lincoln named his second son, Edward Baker Lincoln, after him, and his death affected Lincoln deeply.

In June 1861, two months after the surrender of Fort Sumter, Baker defied the pacifist teachings of his Quaker faith and joined the army. On October 21 of the same year his regiment found itself in a battle at Ball’s Bluff, Virginia, where he was killed after several hours of fierce fighting. Baker was shot six times, including one shot to the head, with a revolver fired from five feet away.

He quickly became an early martyr for the Union cause, the news of his death spurring memorials in print. This lithograph—produced by the printmaking company Currier & Ives—depicts a scene rather faithful to the reality of Baker’s death. Baker, with the nearly white hair that earned him the nickname “Gray Eagle,” is in the center of the print, leading his men at the front of the line. His left hand clutches his forehead, which is dripping with blood, and his torso bends back, reeling from the gunshot he has, presumably, just suffered. The Confederate who shot him is on the far right of the scene, dressed in gray and pointing his revolver at the colonel. The revolver has fire and smoke at its barrel, suggesting that the shot to the head the colonel received was just the first shot and five more are to follow.

The Union lost most of the major initial battles of the war, making it difficult for artists and printers to produce triumphant propaganda for the Union public. While Baker is certainly not portrayed as triumphant in this lithograph, he is portrayed as a hero. Depictions of triumphant Union military heroes would appear later in the war.

Death of Col. Edward D. Baker, at the Battle of Balls Bluff

Currier & Ives, “Death of Col. Edward D. Baker, at the Battle of Balls Bluff,” The News Media and the Making of America, 1730-1865, accessed July 12, 2020, https://americanantiquarian.org/earlyamericannewsmedia/items/show/52.