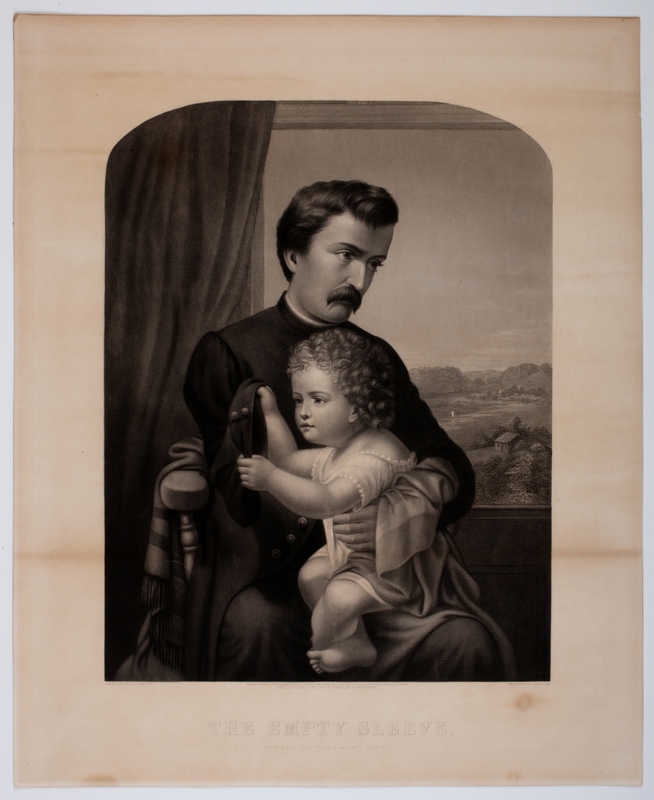 Not all news stories during the Civil War concerned battle outcomes, troop movements, and casualty lists. One ongoing news story—and one that became even more pressing as the war drew to a close—was the emotional and physical wreckage of returning soldiers.

Drawn by a female artist, Adelaide R. Sawyer (b. 1831), this large 1866 print, The Empty Sleeve, takes on as its subject the many thousands of men who returned home from Civil War battlefields missing limbs from injury or amputation. A man holds a curly-haired child, presumably his own offspring, who playfully peers into the empty right sleeve of his jacket. The target audience of the print is not entirely clear, but it evokes sympathy for the plight of amputee veterans. The playfulness of the child and the stateliness of the surroundings suggest that this soldier was able to return home and have a happy family, despite his missing limb. Yet the melancholy expression of the soldier invokes sorrow for the veteran and his innocent child and regret for the costs of war. Furthermore, the subtitle, “What a Tell-Tale Thing Is an Empty Sleeve,” leaves one wondering what tale is actually being told. One of loss and suffering? One of hope and redemption? Part of a larger sentimental selling of the war, it is quite likely that the ambiguity was deliberate, ensuring that the print would appeal to customers with either interpretation. Indeed, it proved to be a popular print and was widely distributed, first in this original version by its renowned engraver, John Chester (J. C.) Buttre (1821-93), and later by other firms who copied the image.

The Empty Sleeve. "What tell-tale thing is an empty sleeve."