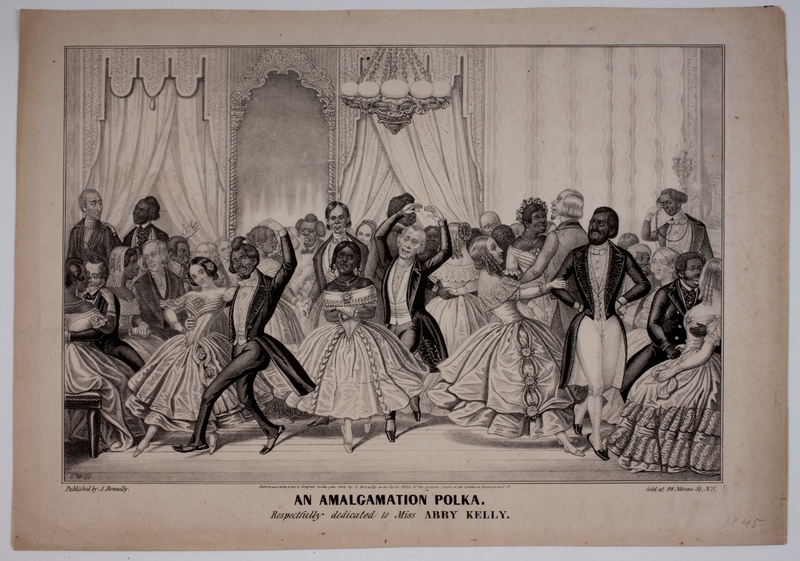 Mid-nineteenth-century visuals of African Americans were largely characterized by satire, an overexaggeration of features, and stereotypes. This lithograph is one of several in an entire Amalgamation Series created by Edward Williams Clay (1799-1857). The series depicts white and black couples marrying, socializing, engaging in typical household activities, and dancing. These were all seen as forms of racial mixing, or what was first termed amalgamation and later miscegenation, and the implications would have been clear to a contemporary viewer.

This particular print, An Amalgamation Polka, is “Respectfully dedicated to Miss Abby Kelly [sic].” By 1845, Abby Kelley (1811-87), soon-to-be Foster, was one of the country’s most well-known abolitionists, speaking to large audiences of both men and women throughout the nation. In this lithograph, Kelley appears to be dancing with her friend and fellow abolitionist Frederick Douglass (ca. 1818-95). Also featured in this lithograph are abolitionists William Lloyd Garrison (1805-79) (in the center with arms raised), Theodore Weld (1803-95) (behind Garrison’s partner), Maria Weston Chapman (b. 1806) (to the right of Garrison), and Robert Purvis (1810-98) (with sideburns and his back turned). Garrison may be depicted twice in this image, perhaps as befitted his importance to abolitionism. He seems to be peeking out from the back of the image, just right of center, this time wearing glasses.

Though the print may appear innocuous to modern eyes, it would have preyed on the fears of many who may have disapproved of slavery but could not conceive of social equality for blacks, and certainly not of intermarriage. The over-caricatured features and the promiscuousness of those depicted suggest that immorality and mayhem would supposedly ensue from such practices. The Amalgamation Series sheds light on the attitudes of those who may have opposed slavery but would have been appalled at the depiction of blacks as members of the respectable middle class and as dancing partners and spouses of whites.