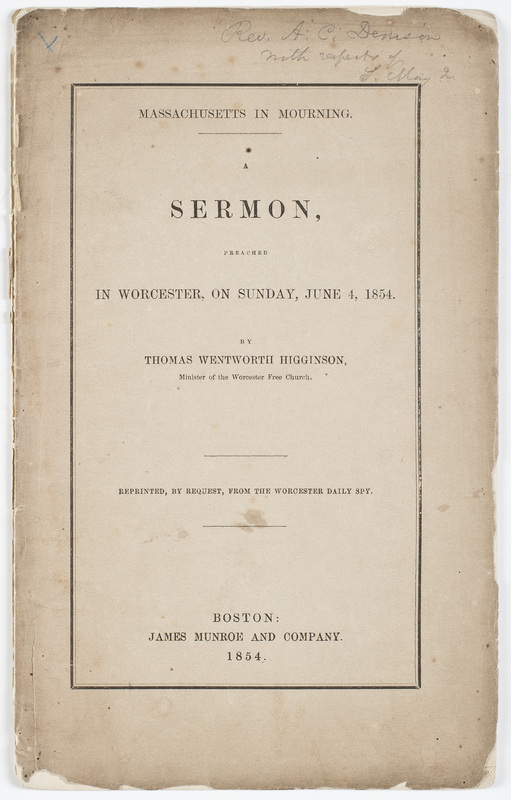 Thomas Wentworth Higginson (1823-1911) was an influential author, abolitionist, Unitarian minister, and soldier. Born in Cambridge, Massachusetts, in 1823, Higginson attended Harvard University and Harvard Divinity School, finishing his divinity degree in 1847. Higginson then served as pastor for the First Religious Society of Newburyport, Massachusetts. Despite the church’s liberal reputation, Higginson’s militant abolitionist approach proved too radical for the congregation and he was forced to resign in 1848. From 1852 to 1858, Higginson served as pastor of the Free Church in Worcester.

In May of 1854, while still a minister in Worcester, Higginson led an unsuccessful effort to free a fugitive slave named Anthony Burns (1834-1862) from the courthouse in Boston as an act of protest against the Fugitive Slave Act of 1850. Upon his return to Worcester, he delivered this sermon, titled Massachusetts in Mourning, in which he uses the Anthony Burns incident as a way to call for the end of apathy toward slavery. He laments that fugitive slaves were not safe even in Massachusetts, and that many stopped only briefly before continuing on to Canada where the Fugitive Slave Act could not reach them. Higginson calls his parishioners to action, asking them at the very least to take a stand in their own city, advising them to “petition your City Government to revoke their appropriation” to Fourth of July celebrations, the promises of which he now saw as “hollow.”

In October 1854, a federal marshal, Asa O. Butman, arrived in Worcester to investigate Higginson’s part in the Burns affair. Butman was confronted by a mob and only escaped the riot with Higginson’s help. The Boston authorities issued a warrant for Higginson’s arrest on the charge of murder of a deputy who died during the effort to free Burns. Higginson presented himself freely, but the case was dropped due to lack of evidence.

When the Civil War finally broke out, Higginson first served as a captain in the Fifty-first Massachusetts Infantry, and then later as a colonel in the First South Carolina volunteers, the first regiment recruited from the freedmen for the federal army. After the war, Higginson spent most of his energy on literature. He was a frequent contributor to the Atlantic Monthly, which eventually led to his role as a mentor to the poet Emily Dickinson (1830-86). In addition to abolition, Higginson was also a fervent activist for women’s rights, labor rights, and temperance.

Click the image below to view the full pamphlet.

Massachusetts in Mourning.; A sermon, preached in Worcester, on Sunday, June 4, 1854.