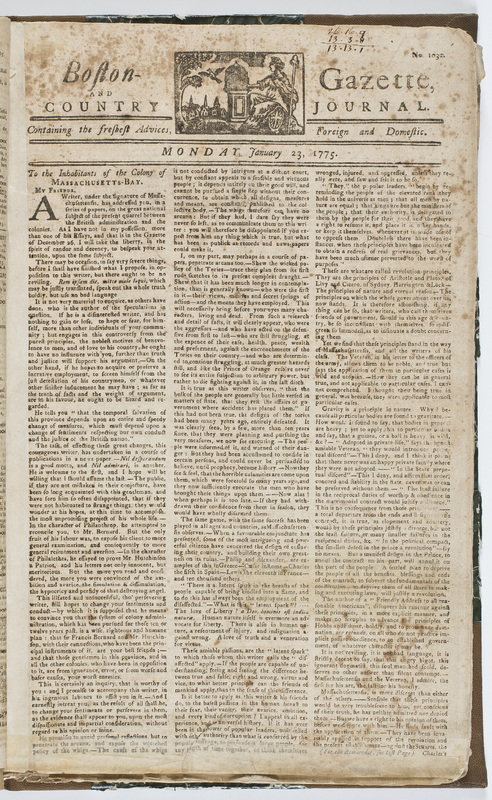 In 1774 and 1775, lawyer and devoted loyalist Daniel Leonard (1740-1829) wrote a series of seventeen articles, published in the Boston Tory newspaper Massachusetts Gazette; and the Boston Post-Boy and Advertiser, under the pseudonym Massachusettensis, defending the policies of the British monarchy. John Adams (1735-1826), another local lawyer and a leader of the colonists’ cause, responded to these articles in the Boston Gazette under the penname Novanglus, arguing that only by asserting their constitutional rights could the colonists remain free.

In this particular article, Adams argues that love and liberty are basic and profound human needs, that all men are created equal, and that kings are to serve the will of the people. These principles, he claims, are evident throughout history from Aristotle to Locke.

Adams’s articles, along with those written by Daniel Leonard under the penname Massachusettensis, show the spirited dialogue that occurred among various parties in the press during the crisis with Britain. The different meanings of Leonard’s and Adams’s pseudonyms were also indicative of expanding colonial unity: “Massachusettensis” literally means “of Massachusetts,” while “Novanglus” stands for New England, signifying a unified voice among the colonies.

Also of note in this issue of the Boston Gazette is the publication of the play The Group by Mercy Otis Warren (1728-1814), a political writer and satirist who was also the wife, sister, and friend of leading patriots. The Group, along with other political poems and plays Warren wrote, served as a popular satirical voice for the colonial cause. Though she published anonymously until 1790, many knew of her early authorship. She was encouraged in her writing through her close friendship with John Adams. In 1805 Warren published one of the earliest histories of the American Revolution, a three-volume History of the Rise, Progress, and Termination of the American Revolution.


Click the image below to browse the full issue.

The Boston Gazette, and Country Journal

“"To the Inhabitants of the Colony of Massachusetts-Bay.",” The News Media and the Making of America, 1730-1865, accessed January 15, 2021, https://americanantiquarian.org/earlyamericannewsmedia/items/show/63.