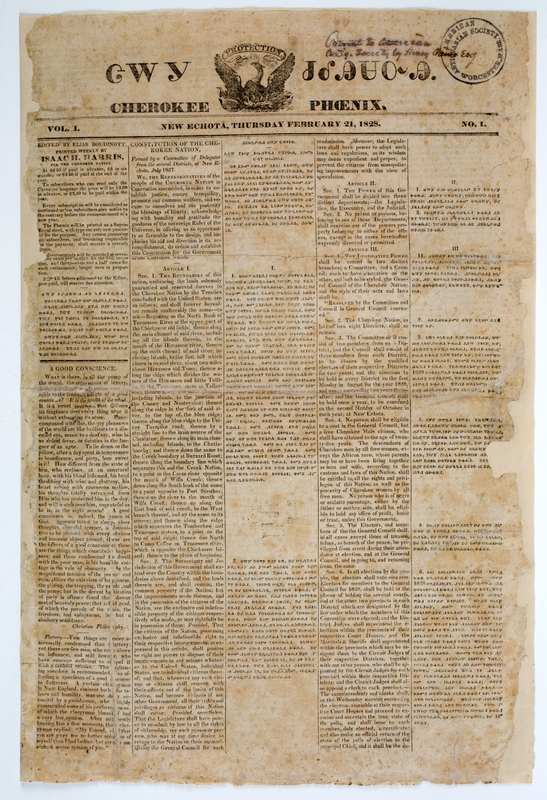 The Cherokee Phoenix was the first newspaper published by Native Americans. In 1825 the Cherokee Council pledged $1,500 for the purchase of a printing press and type; the American Board of Commissioners for Foreign Missions also pledged assistance. By 1828 a printing shop had been erected in New Echota, Georgia, and stocked with type and a cast iron press shipped from Boston. Elias Boudinot (1802-39), a Cherokee schoolmaster, was selected as editor of the newspaper. Half of its content was to be set in the eighty-five-character Cherokee syllabary devised by Sequoyah (1767-1843), the son of a Cherokee chief’s daughter and a Virginia fur trader.

From the beginning, the newspaper sought a wide audience. It served first as an advocate for the Cherokee Nation, fighting especially against its removal from the eastern states. By 1829 its coverage had broadened to other Native American issues, prompting a title change to Cherokee Phoenix and Indians’ Advocate. The paper ceased publication on May 31, 1834. There were thoughts of reviving it the next year, but the Georgia Guard confiscated the press and threw out the type.

“Cherokee Phoenix,” The News Media and the Making of America, 1730-1865, accessed May 27, 2020, https://americanantiquarian.org/earlyamericannewsmedia/items/show/69.