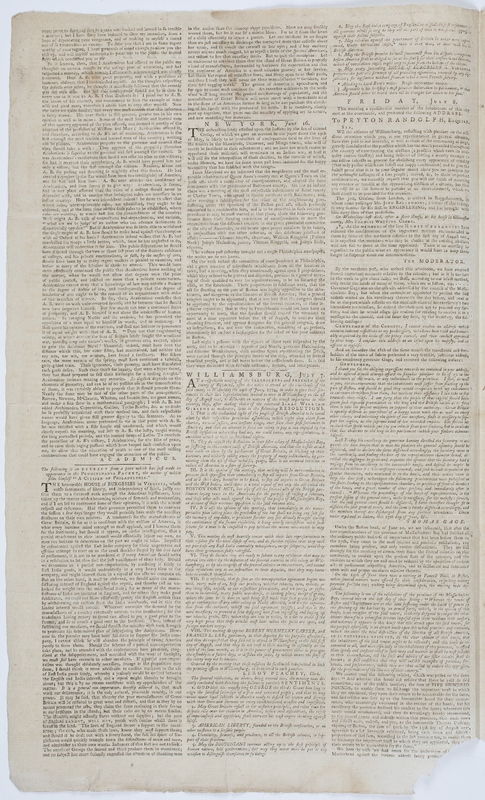 This issue of the Virginia Gazette includes a summary of a meeting held to discuss resolutions with the representatives from Richmond County who would be attending the First Virginia Convention on August 1, 1774. (There would eventually be five Virginia conventions.) Virginia’s colonial government, the House of Burgesses, had been dissolved after calling for a day of prayer to show their support for Boston after the Boston Port Act. In response to the dissolution, the Virginians called for a convention to discuss their plans for action against the British and in support of Boston, as well as a meeting of all the colonies, the Continental Congress. In the meeting described, the participants strongly stated their support of the Bostonians in their “sister colony” of Massachusetts and their opposition to British policy, calling for a non-importation agreement and the repeal of all of the new acts laid out by Parliament. Despite their call for unity and fairness, they maintained their loyalty to the Crown.

Clementia Rind (d. 1774) was publisher and printer of the Virginia Gazette at this time, having taken over the printing business after the death of her husband, William Rind (1733-73). Rind’s Gazette was one of three by the same name, all located in Williamsburg, Virginia. Through this article, Rind informs her readers about the political activities of their representatives, while also illustrating Virginia’s solidarity with Massachusetts. Through articles such as these, printers spread the news about the activities of their patriot representatives, as well as demonstrated the bond that was growing among the colonies.

“"Williamsburg, July 7. At a respectable meeting of the Freeholders and Freemen of the county of Richmond…",” The News Media and the Making of America, 1730-1865, accessed January 15, 2021, https://americanantiquarian.org/earlyamericannewsmedia/items/show/78.