Lecture On the War: C. C. Coffin, Esq. Known as "Carleton" of the Boston Journal 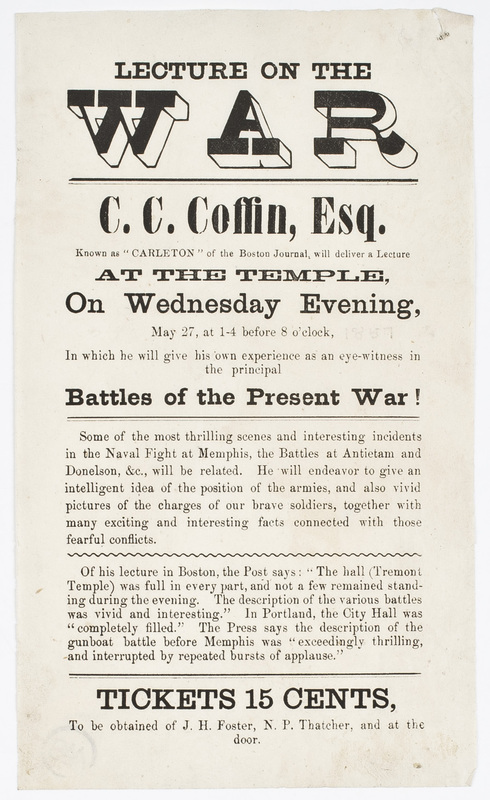 Charles Carleton Coffin (1823-96) was one of a dozen or so battlefield correspondents whose work during the Civil War made them into something new in American journalism: celebrity reporters. Writing under the penname “Carleton” for the Boston Journal, Coffin covered many of the famous battles of the war: Bull Run, Antietam, Fredericksburg, Gettysburg, Petersburg, and many others. He was the ideal writer for a New England audience because he viewed the war through the lens of abolitionism. For him the war was “a great moral convulsion, . . . a mighty conflict of ideas,” as he wrote in his memoirs. It was, quite simply, “the war between Slavery and Freedom.” His reporting was filled with vivid description of the chaos and utter carnage of battle. “How lavish was the expenditure of blood!” he wrote. But he believed that the righteous cause was worth the fearful cost: “The people of America, by example, have shown the world that civil and religious liberty for all, as well as for the few, is of more value than human life.”

Coffin’s ability to imbue narratives of “thrilling scenes” with moral meaning helped to make him a popular lecturer as well as writer. In antebellum America the lecture circuit had already become a kind of news medium, especially in the North. This is an advertising flyer for one of Coffin’s wartime lectures in Portsmouth, New Hampshire, in May 1863. Because the Civil War took place on American soil in the age of the railroad, it was possible for battlefield correspondents to travel back home to Boston, New York, Philadelphia, or other Northern cities immediately after a great battle. And they usually did. Through lectures, Civil War correspondents such as C. C. Coffin were able to further build their reputation and fame.

Lecture On the War: C. C. Coffin, Esq. Known as "Carleton" of the Boston Journal

Lecture On the War: C. C. Coffin, Esq. Known as "Carleton" of the Boston Journal, will deliver a Lecture at the Temple, On Wednesday Evening, May 27, at 1-4 before 8 o'clock, In which he will give his own experience as an eye-witness in the principal Battles of the Present War!

“Lecture On the War: C. C. Coffin, Esq. Known as "Carleton" of the Boston Journal,” The News Media and the Making of America, 1730-1865, accessed May 26, 2020, https://americanantiquarian.org/earlyamericannewsmedia/items/show/84.