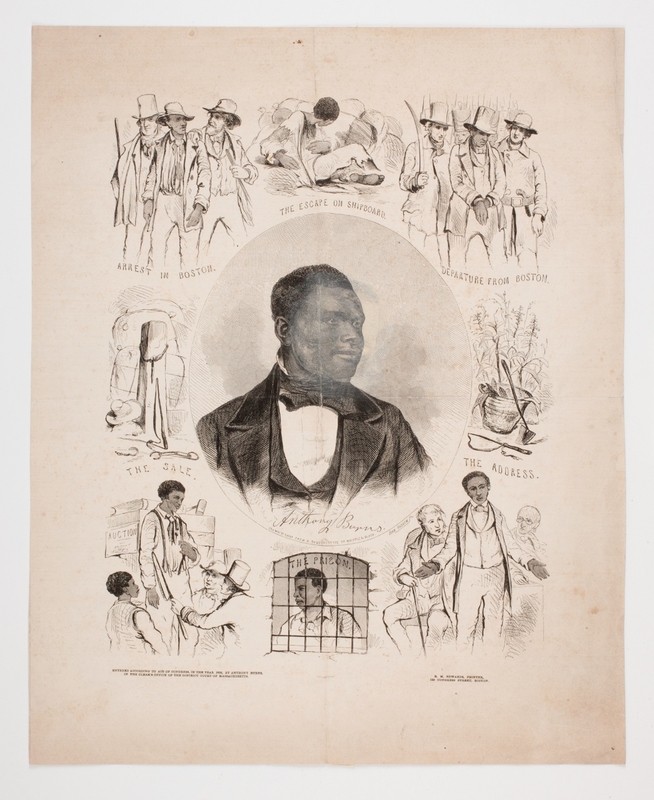 This large broadside, printed by R. M. Edwards of Boston in 1855, features woodcuts portraying scenes from the life of Anthony Burns (1834-62), a former fugitive and then freed slave whose story sparked fierce abolitionist reaction throughout Massachusetts. The large center portrait of Burns is a woodcut engraved by John Andrews after a daguerreotype taken by Whipple & Black. Below the portrait is a facsimile of Burns’s signature. The surrounding scenes, clockwise from the lower left (and not in chronological order), show young Burns being sold at auction; a whipping post with broken shackles and baled cotton; his arrest in Boston; his escape to Boston on shipboard; a field of grain with a bucket, spade, and whip; Burns addressing crowds of eager listeners in the North after he was freed; and at the bottom, a picture of Burns in a Boston jail. The design was copyrighted by Burns in January 1855 and was most likely created to advertise his speaking tour in the North, which helped advance the abolitionist cause and became a source of funding for his own education.

The story of Anthony Burns sheds light on the fierce reaction of the North to the Fugitive Slave Act, passed as part of the Compromise of 1850, which stated that any runaway slave found in the North must be returned to his or her owner in the South. On May 24, 1854, escaped slave Anthony Burns was apprehended on the streets of Boston and brought to the courthouse, where he was imprisoned awaiting trial to determine whether he must be returned to his master, Charles F. Suttle, of Alexandria, Virginia.

On the evening of May 26, 1854, a mob of both white and black men, armed with a plank as a battering ram and two axes with which to break down the door, attacked the west side of the building in order to free Burns. Worcester, Massachusetts, minister Thomas Wentworth Higginson (1823-1911) and another man succeeded in gaining entry, but were quickly forced back outside. Amid the chaos, a shot was fired and a deputy who had been guarding the building was stabbed. He died several minutes later. A group of eleven men, both black and white, were charged with the murder.

On June 2, 1854, the judge announced that Burns would be returned to his master. The assembled crowd was outraged, and U.S. marshals and the city police worked for over an hour to clear the crowds from the streets. Later that afternoon, under presidential authority and with a six-pound cannon in tow, a large number of armed forces escorted Burns to a waiting ship at Long Wharf, where he began his journey back to Virginia and to slavery. Tens of thousands of people lined the streets as he did so.

Although the rescue attempt of Anthony Burns was unsuccessful, within a year supporters had raised $1,300 to buy his freedom, and Burns returned to Boston. Upon his return to the North, Burns made the rounds as a speaker, telling his story in order to raise money to pay for his education at Oberlin College in Ohio, where he studied for the ministry. This broadside supported that lecture tour and his fundraising efforts. After earning his degree he moved to Upper Canada to serve as a Baptist minister. He died of tuberculosis in St. Catharine’s, Ontario, in 1862 at the age of twenty-eight.