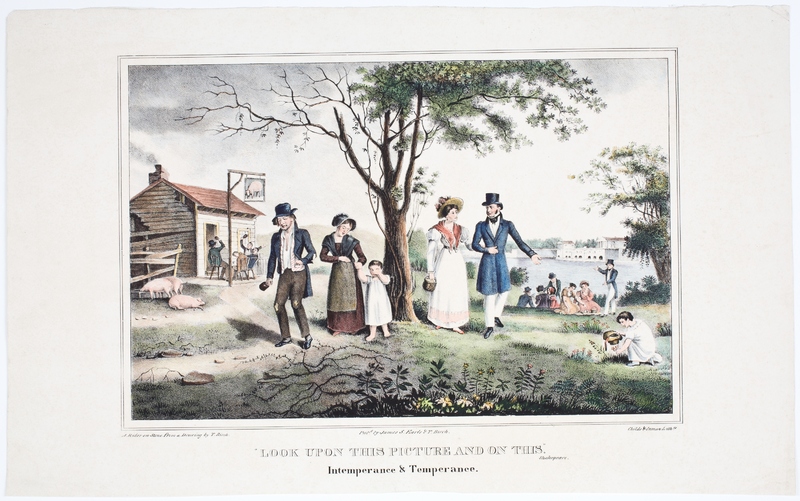 Just as the temperance movement harnessed the power of the printed word in newspapers, periodicals, tracts, and almanacs to spread statistics and facts about the effects of alcohol, it also utilized printed images. Temperance images were pervasive throughout early nineteenth-century publications as a particularly powerful way to convey the message that alcohol was destructive and should be moderated or—as some believed—prohibited for a healthy, functioning society.

This circa 1832 lithograph by Alexander Rider, based on an original sketch by Thomas Birch (1779-1851), illustrates this trend by depicting opposing scenes of temperance and intemperance. Like many images produced by the temperance movement—which co-opted and adapted the “liberty tree” symbol familiar to many—a tree serves as the central emblem of society and liberty. The image shows the effects of temperance and intemperance on society in a single frame, with the tree providing the contrast point between a healthy society and a society approaching ruin. The right side of the tree appears healthy with strong limbs and full foliage. It sits in fertile soil where grass and other healthy trees and flowers flourish. In contrast, the left side of the tree appears dead and barren. Its limbs are broken, and its branches are nearly absent of vegetation. The surrounding ground appears dry and cracked, and nothing is growing. Something (alcohol) is sapping this environment of its vitality and its ability to produce.

This metaphor is extended in the renderings of the people and structures of the illustration, and it becomes clear that intemperance is the culprit. On the left, a dilapidated structure hosts boisterous men waving bottles on its porch. One inebriated fellow slumps under a sign featuring a pig, suggesting a correlation between the drinking men and the pigs outside the tavern. A family walks away from what was perhaps their pig farm and livelihood, the father with downcast eyes and ragged clothes, a bottle in his hand. He walks separately from his family, the wife neatly but darkly dressed and the reluctant, shoeless child weeping and rubbing its eyes.

In contrast, alcohol appears to be absent on the right side of the illustration. Friends are gathered in small groups, with men and women socializing and eating in the verdant landscape. Across the river, a factory or mill is visible, representing employment and people engaged in fruitful labor. The husband and wife hold hands as they look at each other, and their well-dressed child plays nearby collecting flowers. The absence of alcohol and even the light-colored clothing of the couple suggest that the shadow of intemperance has not fallen on them as it has the family on the left. Temperance has kept this half of society healthy and productive.

Childs & Inman, “"Look Upon This Picture and On This." Intemperance & Temperance.,” The News Media and the Making of America, 1730-1865, accessed December 1, 2020, https://americanantiquarian.org/earlyamericannewsmedia/items/show/89.