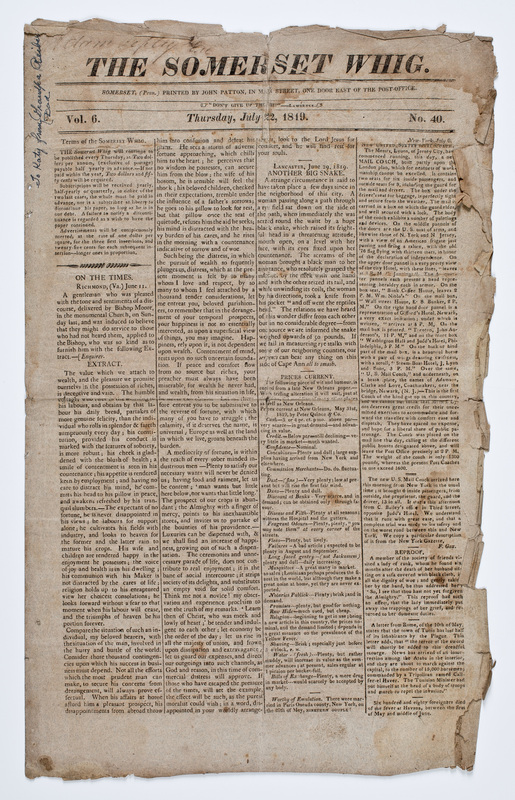 While big dailies were beginning to dominate the newspaper markets of the urban centers in the first half of the nineteenth century, smaller newspapers began to pop up in more rural areas. These small local papers carried news from around the country, clipped from other newspapers. (The U.S. Post Office allowed newspaper editors to exchange copies with one another free of postage.) These papers also gradually began to focus on more local happenings, such as marriages, stage and mail coach arrivals, politics, crime, and business news.

This paper from Somerset, Pennsylvania, a town of only about 450 people in 1820, demonstrates these trends in small-town newspapers. The front page includes an extract from a discourse by a prominent bishop in Richmond, Virginia; financial news from New Orleans; and the attack of a giant snake on a woman in Lancaster, Pennsylvania. The importance of the postal service is highlighted by a front-page story about the establishment of a new mail coach out of New York and New Jersey, emphasizing its amenities and the patriotic symbolism painted on the outside panels. Its first arrival in Somerset is noted, along with the observation that it “runs with great ease.”

“The Somerset Whig,” The News Media and the Making of America, 1730-1865, accessed June 17, 2021, https://americanantiquarian.org/earlyamericannewsmedia/items/show/94.